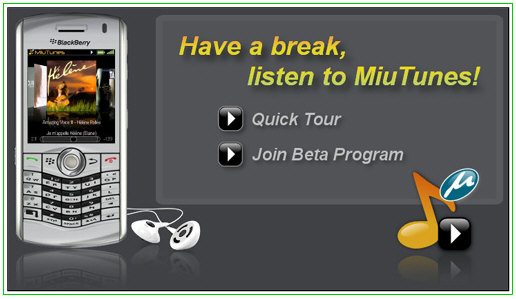 May 1st marked the launch of a new beta program offered by Simprit. Some of you may know Simprit from their other popular program called GridMagic, but this beta is for their new media player program called MiuTunes, which I have to say is amazing at this point from my usage, so here’s my mini review so far…

First off the UI on this media player is awesome, think of the UI of Flipside, but only better, let’s have a look at it.

First off, the options used to browse through your music is great and you can break it down to the following:

The cover art renders awesome and has no real lag that I have noticed from my usage the “flowing” through the covers is seamless and easy with the trackball navigation for sure.

Unless your music is already tagged with the IDV3 data, you may need to download the album art using the options menu, which MiuTunes makes extremely easy, it can grab the album art, you also have the option to get more info about the artist and the album as well, the information when clicked is provided by Amazon.com

Looking for options?…MiuTunes has plenty..but not too many for it to be overwhelming in the choices either, with the ability to create playlists, control download settings (save on data usage), scan for new music and much more it’s worth checking out especially if ya find that Flipside was “missing” something.

You can join the beta over @ MiuTunes

Now with that being said, remember this is a BETA, so be sure to report any problems you may come across with the app, I have found 3 “quirks” myself so far..

For a deeper look as well, maybe ya wanna see it in action, the video of the UI is included down below.