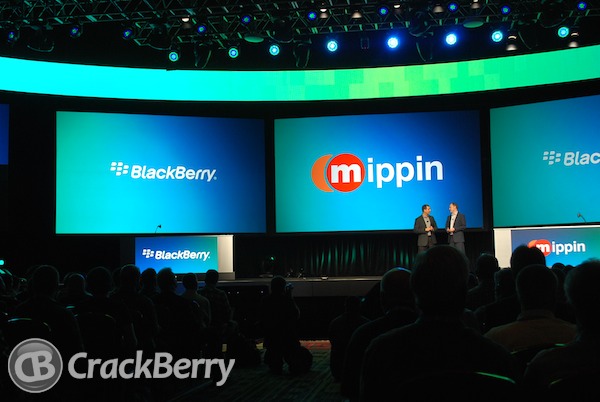 In the last 18 months more than 50,000 apps have been built using Mippin’s app-creation platform. This includes apps for the Daily Express, Daily Star and OK! Magazine UK. The OK! Magazine UK app has proven to be particularly popular, racking up 280,000 downloads in just six months – 65 percent of which were on BlackBerry devices.
With today’s announcement, online publishers can now take their content and build it into an app for BlackBerry smartphones and the BlackBerry PlayBook in less than 10 minutes, without having to pay any registration or submission fees. Apps can also be fully integrated with BlackBerry® Messenger (BBM™), allowing publishers to create a unique social content experience and encourage content sharing with other BlackBerry customers.
Publishers will also be able to generate revenue from apps built using the BlackBerry App Generator through in-app advertising using the BlackBerry Advertising Service.

“With the BlackBerry App Generator it’s now easier than ever for publishers to build and launch an app on BlackBerry App World,” said Nick Barnett, CEO, Mippin. “Whereas creating an app from scratch can cost thousands of pounds and take several months, BlackBerry App Generator is completely free and can deliver a stunning app in less than 10 minutes. Plus, with BBM integration available, publishers can make consuming content a truly social experience.”
“With the launch of BlackBerry App Generator Mippin and RIM are tearing down the barriers and finding new ways to encourage content publishers to create apps,” said Martyn Mallick, Vice President, Global Alliances and Business Development at Research In Motion. “For customers, this means that even more of their favourite published content will soon be available to download as apps.”

BlackBerry App Generator is available from today at: blackberryappgenerator.com

Apps can be created for smartphones running the BlackBerry® OS v5.0 and higher and BlackBerry Playbook tablets. Support for BlackBerry® 10 will be added shortly.

About Mippin
Mippin creates award winning, affordable apps and is the largest developer of apps in the world. The Mippin App Factory is a simple to use mobile app builder that allows anyone with online content to build an app, for every app platform, including BlackBerry, iPhone, iPad, Android, Nokia, Symbian, bada and HTML5.

They license the platform to organisations including leading handset manufacturers and mobile carriers. App Factory implementations have built and published over 50,000 apps in the last 18 months, making Mippin the largest app developer in the world. Mippin currently has apps in the top 15 in the Apple App Store, BlackBerry App World™ and Windows Phone Marketplace.

Most recently in 2011, Mippin has been recognised for its award winning HTML5 development skills through winning the BlackBerry Partners Fund Developer Challenge 2011 (Best WebWorks App, EMEA, for Daily Express) and has won the ‘most effective publishing solution' award for its ‘Mippin App Factory’ at the Effective Mobile Marketing Awards (EMMAs).