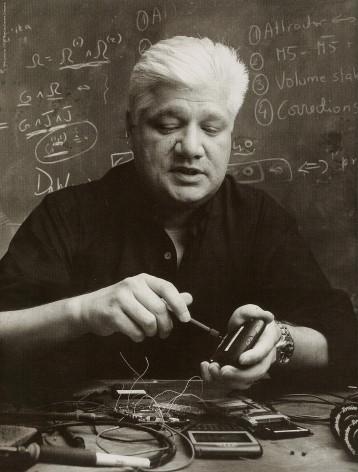 *UPDATE - At the time of writing this article we had based our original information as it was posted on Electronista. Since the time if the original publishing, new information has come about wherein the quoted comments from Co-CEO Mike Lazaridis may have been taken out of context or looked into to deeply. Since the new information is now available to us, we have posted the transcript below the break for you all to read. *

This new talk of touchscreen phones and tablets is stemming from a recent TD Newcrest technology conference keynote Lazaridis gave in Toronto. While Lazaridis was downplaying the efforts of the iPhone he addressed the tablet hype as well. Lazaridis claims there is no market for tablets and that as smartphones are getting more powerful and more computer like, this by extension would reduce the need for a tablet. While we tend to somewhat agree that tablets and devices like Apple's new iPad are still finding their place in the world, the fact that Apple has pushed well over 300,000 of them and stores have long waiting lists clearly shows there is indeed an emerging market here that appears to have momentum behind it.

This is one of those posts where I could go on a big never-ending rant, so we'll end this early knowing that WES 2010 is just around the corner, where we'll hopefully gain some more insight into this and other areas of interest surrounding RIM. Worst case, we'll carry on this conversation in a live CrackBerry Podcast next week where plenty of booze is involved. That will be fun.

In an effort to clarify the situation at hand, here are some excertps from the transcript from the TD Newcrest keynote:

<Q>: Let me move on to one more. In December, you gave an interview to the Financial Post, there was a really interesting paragraph that you talked about handling devices and you raised a lot of good questions about their value in what they would accomplish. You didn’t really spend as much time, I think as everyone here would want, if you want to answer me, and it was a shorter interview. Maybe you can answer some of those questions now, the markets evolved a little bit, there’s been some product announcements. What are your thoughts about that type of form factor?

<A – Mike Lazaridis>: Well. The trends we’ve been following have been an -- there’s been, over the last three to four years, organizations have discovered the value of smartphones clearly, and that’s why we’re here, and that’s what we’re talking. And smartphones are always starting to space the need for laptops, but not all laptops, and not all needs. And I know that there are risks organizations that ask their customers when they join, when get hired, do you want a smartphone or a laptop very few get the opportunity to have both. So I think that’s an important thing, those are differentiated.

So the question you have ask yourself is when it comes to tablet, what market or what opportunities still it’s solving, what problem is it solving, and is it just a replacement laptop. I think that’s a difficult one to judge. But I think again if you look at what’s happening with smartphones are getting bigger, screens are getting bigger and getting more powerful and faster CPUs, more memory, we go in the 4G networks, we’ve got Wi-Fi, it’s just got everything, the operating systems are becoming more, more powerful, the tools are becoming more, more powerful, more applications are being developed, and are being used in more and more both enterprise and consumer spaces. So, I think at this point if you have to take the whole thing into consideration, you can’t say what’s the market for tablets in exclusion of the other devices, you have to put the whole thing together and I don’t think it’s that clear yet.

<Q>: In the consumer market, it seems like, in the smartphones, especially, there is a line to be drawn between QWERTY and touchscreen, and you dominate in the QWERTY space. And I wondered what you think -- I think the audience by watching, what do you think about the touchscreen form factor and how that needs to evolve and what do you think you need to do?

<A – Mike Lazaridis>: Well, I mean, clearly the best thing to do is to provide the choice and let the consumer and the customer to ultimately decide. I think what we’re seeing in the market though is that, it’s not clear if one side fits all and it really isn’t. And you can see it because a lot of people are realizing the incredible value and lifestyle improvement that are well-designed QWERTY push messaging experience brings to table. It’s really, really important. We’re finding -- if you look at the surveys, you can see that large amount of the customers that have purchased touchscreen devices in last two years, they intend to get a device with the QWERTY keyboard on it now, right. I mean, they’ve got into a point where they’ve realize that a touchscreen alone is not enough; so that’s important.

I think with the trackpad technology is going into the BlackBerrys now, we provide a gesture and an elegance to control. Again, that’s unmatched. So, I think that is a third dimension, because you talk about touchscreen devices, you talk about QWERTY devices, but I would argue this is third, the whole control, command and control of things like well-designed trackpad technologies. I think, that’s really, really important. And I think, we continue to evolve with the research and invest in the Storm technology to make sure we get those right, we learned a lot and we continue to evolve that platform. I think that again what’s important is we provide that choice and we don’t lose sight of the fact what’s made us famous and what’s driving our sales, which is our QWERTY keyboards and our incredible track [indiscernible].