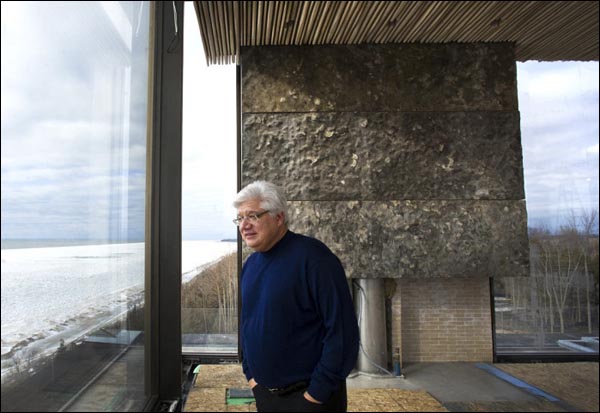 In 2003, Mike Lazaridis and his wife Ophelia bought a 51-hectare bit of property on the shore of Lake Huron. The property was purchased for a paltry $800,000, formerly planned for a subdivision that had never been built. Five Canadian architectural firms competed in 2005 to win the contract to design the project, with Toronto-based Hariri Pontarini Architects coming out on top. Construction began in August of 2006, but progress has been slow as Mike hasn't had much time to devote to the project.

So what is the project, exactly? It's a house. In fact a 26,000 square-foot house, overlooking the lake and shore. The concept revolves around three key materials: glass, stone and bronze, which have been extracted or manufactured in the region. This isn't just any house though. It's not just a second home for Mike and his family. In fact, he plans for it to be an exclusive retreat for the world's top scientific and political minds. A space to inspire, for exchanging ideas and big dreams. “My hope is that when they come here, they’ll see all the good and be inspired by it,” Mike said in an interview earlier this week. “[I want] to inspire the groups to think and think big and be bold. That’s something that has worked for me for decades and I can’t see it stopping. I’m not done yet.”

With construction taking so long, and no one being allowed inside to view progress, there is a lot of speculation about what's being built and how much the project will total. Though sure to be one of the most expensive residential developments in Canada, we won't know for sure until construction is done and the final cost is disclosed. Mike is not concerned with the cost of the project, however, and reminds us that isn't the point. “I’ve been blessed with the opportunity to invest in something that pushes the limits of Canadian architecture, engineering, manufacturing,” he explains. “The fact that we were able to do this all with Canadian talent is a statement to the world.”

Mike Lazaridis came to Canada as a young boy with his Greek parents and sister, fleeing persecution in Turkey. “The thing is, I’ve always been grateful to this country because it accepted my parents. We came here with a few suitcases and very little money. [Canada] gave them an opportunity to rebuild their lives. It educated me and my sister. And I’ve always had this gratefulness in me to give back, and that’s what I have been doing.”

You can see more about the project after the break, and find more pictures at the source link below.