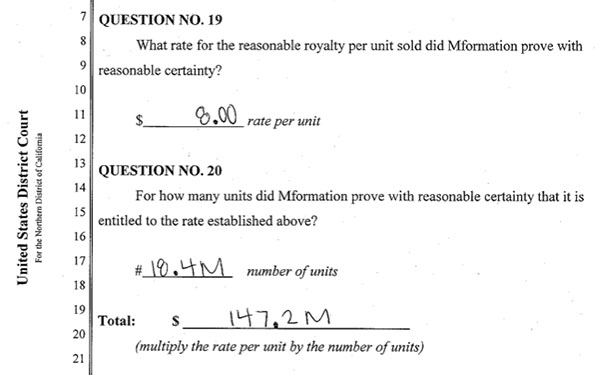 WATERLOO, ONTARIO--(Marketwire - July 14, 2012) - Research In Motion Limited (RIM) (NASDAQ:RIMM)(TSX:RIM), a world leader in the mobile communications market, yesterday learned that a jury returned a verdict against RIM in the amount of $147.2 million (USD) in an action brought by Mformation in the U.S. District Court for the Northern District of California. RIM is disappointed by the outcome and is evaluating all legal options. Additionally, the trial judge has yet to decide certain legal issues that might impact the verdict. RIM will await those rulings before deciding whether to pursue an appeal.

RIM has worked hard for many years to independently develop its leading-edge BlackBerry technology and industry-leading intellectual property portfolio, and RIM does not believe that the Mformation patent in question is valid.

With all the lawsuits happening these days, it has become increasingly clear that just about anyone can be hit with patent claims. Recently RIM and Nokia got into it but a longstanding battle with Mformation Technologies against RIM now has a verdict and well, it didn't turn out so well for RIM.

On the bright side, RIM can still make a motion to appeal and the payout only covers devices available at the time of filing, not future or foreign damages which could have potentially amounted to $680M assuming 78 million devices multiplied by $8 per unit.