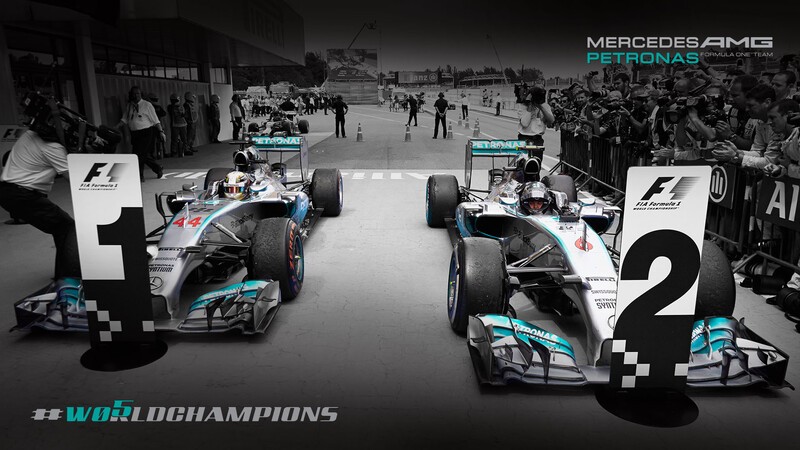 The 2014 Formula 1 season for the MERCEDES AMG PETRONAS Formula One team has come to an end, and they're going out on an insanely high note. Between Lewis Hamilton and Nico Rosberg, there were 16 wins, 18 pole positions, 12 fastest laps and 31 podium finishes throughout the 2014 season.

On top of that, there was eleven one-two wins in a single season which, broke the previous record put in place by McLaren in 1988 and of course, Lewis Hamilton won the first ever Formula 1 Russian Grand Prix at the Sochi Autodrom that sealed the deal on the MERCEDES AMG PETRONAS team winning the F1 Constructors' Championship for Mercedes-Benz. That alone would be a great season for the team, but there's more!

For the second time in his career, Lewis Hamilton has claimed the FIA Formula One World Drivers' Championship trophy. His first arrived in 2008, with McLaren, but he has now claimed it for 2014 as well. Over at the Inside BlackBerry blog, our good friend Donny Halliwell scored a great interview with Lewis, you can head on over there to read the full interview, but here's a bit of it.

Halliwell: What drives you to be the best you can be?

Hamilton: "I always want to be the best at what I do. As a kid, whatever I was doing, if I was playing football or whatever I was applying my energy to at the time, I always wanted to do it to the best of my abilities. And I was always interested in finding out how I could do it better. In racing there are always things you can learn, every single day. There is always space for improvement, and I think that applies to everything in life. That's something that I really took from when I met Nelson Mandela years ago, and he said 'I'm still learning' and he was 92! I've also taken a lot of inspiration from observing and learning about sportsmen I admire. Watching the likes of Ayrton Senna and Muhammad Ali compete, reading about them, seeing how they handled their preparation and so on."

Halliwell: What's your most memorable moment from this season?

Hamilton: "Without a doubt, Silverstone. Winning your home Grand Prix is something every racing driver always wants to achieve. The race weekend this year was particularly special for me. The support from the fans was an indescribable experience, it really is unbelievable. And the motivation I take from that support is huge. I try to imagine what it's like for the fans who are in the campsites, and those who wake up early to travel to the circuit to watch the race. I try and envisage what they're feeling, why they do it. And I want to ensure I put on the best performance I can for them. "

Halliwell: It truly is a team effort to be able make it to the circuit, let alone to finish, let alone win. What message do you have for your teammates, crew and fans?

Hamilton: "My saying is; We win and lose together. I think that really does apply to both my fans, family and the team. With the team, whether it be my guys that are at each Grand Prix, the team back at the factory who work day and night to develop the car, build the parts and send the parts, the IT team, and the crew cleaning the factory. Everyone. We do it together. We all feel the joy when we are winning and the same pain when we are losing. And that applies also to my fans and family. I always remind myself if I'm having a down day because of a bad race it's not just me. That feeling I'm having is shared by my family, the team and my fans. When we win they feel the joy as well. That's why I say we win and lose together, and I definitely couldn't do it without them."

Halliwell: Through a long season on the road, how do you stay in touch with your family and close friends?

Hamilton: "That's the great thing about today, having smartphones to stay in touch and share experiences. 99% of your friends and family can't be with you throughout the year, travel to all the countries you get to go to, meet all the different people, and experience the experiences you're having. My BlackBerry enables me to stay connected, whether that be through the immediacy of BBM or sharing photos. Knowing that whilst there may be thousands of miles between you, it's almost like they're there. That's the coolest thing, and that's how I stay in touch with the people that are important to me."

Donny didn't skimp out on the important questions either, you know the one I'm referring to.

Halliwell: What BlackBerry device are you using currently and what is your favourite feature of the device?

Hamilton: "I've just got the BlackBerry Passport… The keyboard is cool, and will certainly appeal to the original BlackBerry users. I am also impressed by the screen resolution and the size of it, it feels like I have a small laptop in your hands, but one that is really mobile. "

Now, I don't pretend to be a big F1 fan but even I know based on those stats alone, it was an amazing season for the MERCEDES AMG PETRONAS team, so a big congratulations to them! And since we're highlighting this because of the BlackBerry sponsorship of the team, congrats to BlackBerry as well.