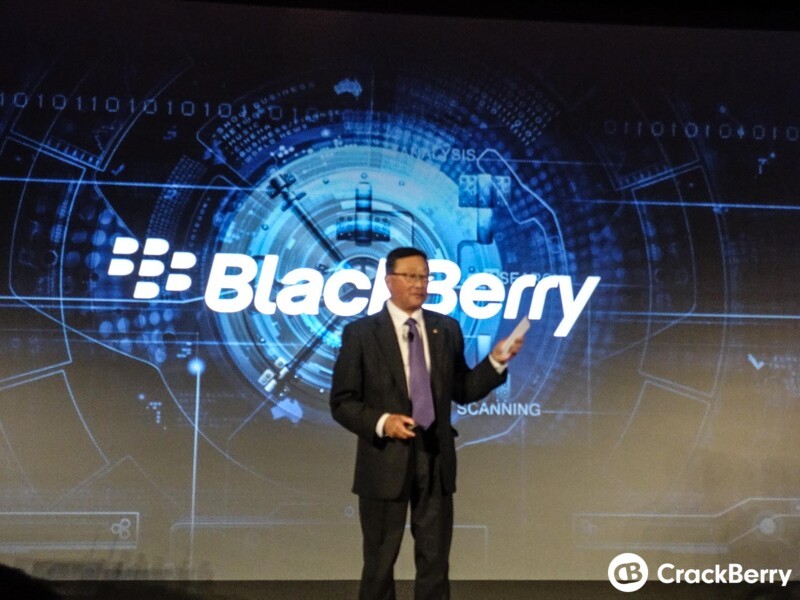 BlackBerry's CEO, John Chen, rebuked questions about the company's flagging handset business during a media Q&A at the annual BlackBerry Security Summit in New York City on Tuesday, saying that reporters have "conditioned [themselves] to ask me that question."

"If I come to you with a billion dollar software business with a 70% margin," said Chen, "you'd never ask me about handsets," which appeared to be his way of saying that the potentially high-margin software business will more than make up for the company's money-losing hardware venture — eventually.

"What we've done with this turnaround is amazing."

But more than anything, said Chen, BlackBerry needs to do a better job at explaining its new position in the market, overcoming the media's tendency to dramatically overstate the importance of hardware to its future.

"From a mathematical perspective, you have a piece of business (hardware) that will never yield the kinds of margins a software business will yield," he continued, "so the question becomes one of scale." Chen continued his oft-spoken refrain of promising to stay in the hardware business only until it becomes unlikely the venture will make a profit. "If [it] can't make money, I have a fiduciary responsibility to my investors" to get out of it.

In an interview with CrackBerry, Marty Beard, BlackBerry's chief operating officer and long-time colleague of Chen, cautioned the media against maintaining the popular, nostalgia-driven narrative that has pervaded the company for nearly 20 years. "We're a software company. We've always been a software company. But for a long time, the there was a tangible thing we built, the phone, that showcased that software." Today, while the phone business is still very much alive, it is no longer a driving force.

"At the end of the day you're a business, and you have to bring in more than you're spending," said Beard. "When John took over this company in 2013 [from former CEO Thorsten Heins], we were burning $1 billion in cash per quarter. At that rate," he said, "we couldn't have been around for long. What we've done with this turnaround is amazing."

Most critics of BlackBerry's recent performance "have never turned around anything besides a car."

For Chen, BlackBerry is well past its turnaround goal, and is now looking to leverage its extensive software suite to sell to customers who need overarching mobile security solutions. "To many people, it doesn't matter how much you've done right, because all they can focus on is what you've done wrong," he said. BlackBerry's biggest challenge, he said, is to convince people — often the same customers that bought handsets in the hundreds of thousands — that it is just as valuable, or even more so, as a software company.

Beard praised his boss, noting that most critics of BlackBerry's recent performance "have never turned around anything besides a car." That the company has had 10 straight quarters of EBITDA growth — handset write-downs notwithstanding — is a significant and overlooked achievement, he said, despite quarterly declines in revenue and a stubborn software sales outlook that failed to garner the customer base Chen hoped for the end of Fiscal 2016.

Beard pins a lot of his hopes on partnerships, which are both numerous and varied. Some of the biggest companies in the space, from Microsoft to Google to Samsung, joined BlackBerry on stage at the Summit, reinforcing the fact that the Waterloo-based company still commands the respect of the tech giants, even if the scale has been reduced to small security code contributions to Android, or integrating Samsung's Knox platform more seamlessly with BES 12. In a narrative controlled by BlackBerry, it is a significant shaper of the mobile security market; to others, it is a minor player in a sea of worthy partners.

Still, as Beard noted in our interview, BlackBerry is stable and focused, with a tremendously promising product portfolio. It just lacks the hooks into the consumer market that made its story so much more compelling for reporters to tell.

Of course, with BlackBerry likely announcing a new Android-based handset next week, that reporting cycle will once again reset, and BlackBerry will ride it until it is no longer convenient to do so. Such is the fickle relationship between tech companies and the media that reports on them.