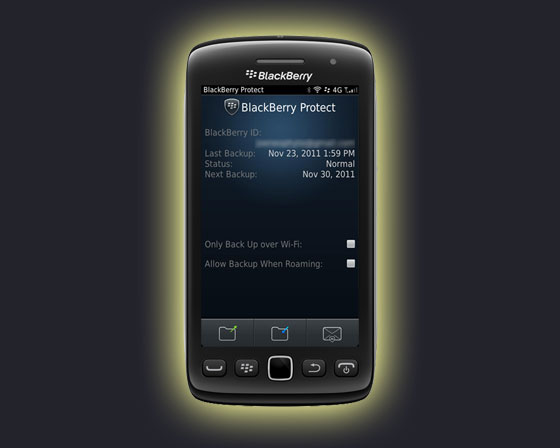 BlackBerry Protect is an app designed to rescue irreplaceable data from your BlackBerry Smartphone. It isn't designed to be used as a standalone device switch product. Its intended purpose is be used more as a last result to recover data from a lost or stolen smartphone (and then destroy the data on that phone). Not too long ago, I tried to emulate this situation, completing a backup on my BlackBerry Torch 9800 and trying to restore that data on my new BlackBerry Torch 9860. When it failed to retrieve the vast majority of my contacts, I was understandably disappointed. So, too, was RIM.

After the article ran, Research In Motion reached out to me to try and figure out just what had happened. I sent them some information about my phones, and they promised to get back to me. On Thursday, they did just that. Two product managers from the company walked me through exactly what happened.

The whole situation reminds me of an issue my sister had with transferring the license plate from one car to the other. It was a complicated situation involving a lease buy-out, a car sold, and a car bought. Things didn't go right, and the tax office tried to charge her double the amount she owed. The leasing company completed its paperwork properly, my sister completed her paperwork properly, and the car dealership completed its paperwork properly. No one did anything incorrectly, yet things still went wrong. And that, my readers, is what happened with BlackBerry Protect.

Email is central to the BlackBerry Experience. I don't mean that metaphorically or figuratively; I mean that quite literally. Several key components of our BlackBerry Smartphones link back and use email accounts to authorize themselves and work properly. Of course the Messages app uses at least one email account, but did you know BlackBerry Messenger and your contacts both use email as a way to keep things running smoothly?

How to Protect Against It

Obviously, I should have followed instructions. You'll notice that in the Setup application, Email Accounts appears first. BlackBerry Protect is not even second in that list. I was attempting to test the limits of Protect, but I didn't realize how heavily that application (and BlackBerry Messenger for that matter) depends on email.

As taught to me many years ago by my wonderful Computer Science teacher, Mrs. Bunn, if a user can do something, he will. At the time, this was more along the lines of a user typing a character when an integer was expected, but the principle is the same. I wasn't prevented from using Protect before setting up email, so I did.

Maybe that should change: Email has to be set up on the Smartphone before Protect can be. Perhaps Protect should be grayed out, dimmed, unavailable until at least one email account is active on the phone. Then again, there are concerns for a world-wide operation where not everyone pays for email services. Perhaps there should be a big red label, "Warning! Set up Email First!" when trying to restore with Protect. Perhaps a system like this (or something better) is already in the works.

And so I've spent the entire article avoiding this phrase: Mea culpa. It's my fault, BlackBerry Protect. If I had just signed in to my email accounts - something I knew you didn't protect - none of this would have happened. You do a great job at salvaging those bits of data that are irretrievable - SMS text messages, certain unsynced contacts, browser bookmarks, and others - but you're not designed to do a device switch. And that's what I tried to force you to do.

I see a bright future for you, BlackBerry Protect. I see you working side by side with BlackBerry ID to create that Over the Air device switch that I so desperately want. I see you finding my phone for me countless time. I see us working hand in hand to create BlackBerry 101 guides to help others with their Smartphones. And I see us doing all that for a long time to come.