Imagine this scenario - it shouldn't be too difficult: you're using your desktop or laptop computer, typing away on your full-sized keyboard when some sort of BlackBerry communication comes through. It might be an email, a Tweet, or even a BBM. You pick up your BlackBerry Smartphone and type out a response on that great, but small keyboard. Messaging done, you return to your work on the computer. That's all well and good, but it could be better. 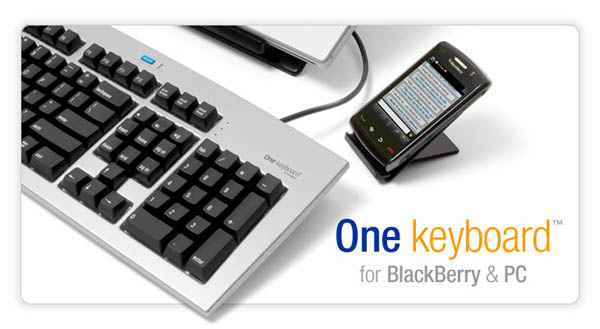 The Matias One Keyboard for BlackBerry & PC allows you to use one keyboard for all your typing needs, be they on a computer or on a BlackBerry. The keyboard uses a custom Bluetooth driver that's installed on your BlackBerry Smartphone and available for download from the company's website. After pairing the Smartphone and keyboard, all that's required is the press of one button to switch between typing on the computer and typing on the BlackBerry.

Matias keyboards work with pretty much every BlackBerry with a name: Bold, Torch, Storm, Curve, Tour Pearl, etc. Matias has developed a good working relationship with Research In Motion; when a new phone comes out, Matias can produce a new Bluetooth driver within a mere two weeks.

Also available from Matias are two folding, travel keyboards. Stuck at the airport and need to send out some long emails? The Matias Folding Keyboard makes things a great deal easier. Though I'm somewhat skilled at typing on my BlackBerry, that speed doesn't hold a candle to the speed I get on a regular keyboard. The Matias Folding Keyboard brings that speed to your ‘Berry, again connecting wirelessly over Bluetooth - no PC required.

The second of the two folding keyboards connects over Bluetooth to your BlackBerry PlayBook. This particular model also connects to Android tablets like the Motorola Xoom and Samsung Galaxy Tab in addition to Bluetooth-enabled Windows and Linux machines. Again, you get the same full-sized keyboard in a convenient folding travel package.

What really got me with these keyboards is just how well they work with the BlackBerry. As I was trying out the keyboards, I thought I had found the device's Achilles heal: spell check. As I typed, the dotted underline appeared under one of my words, letting me know the Smartphone had caught a spelling error. I though I'd have to pick up the phone to correct the mistake. Nope.

After using the arrow keys to return to the misspelled word, a press of the enter keys brings up the correction choices; select the proper spelling with the arrow keys and press enter again to complete the correction. With the entire process written out, it sounds more complicated than it really is. The way Matias designed the keyboard's functionality, it's a very intuitive process. I was able to figure out what to do without any prompting from Steve.

The Matias line of keyboards make typing on your Smartphone a great deal easier. On the road or away from your computer, typing out messages with your thumbs is no big deal. For those longer messages, though, the convenience and comfort of a full sized keyboard is a huge time saver. And in the corporate world - indeed even in your personal life - time is money.