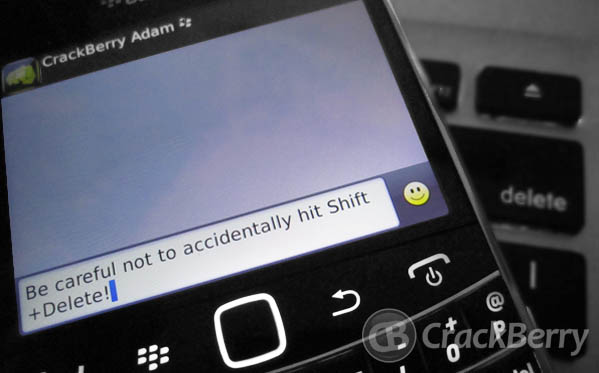 A year ago we discussed the Shift + Delete command - a new (at the time) feature of the BlackBerry OS that some people loved, some hated and some didn't even know existed. When typing away in BlackBerry Messenger, if you press Shift+Delete you will find your message is deleted.

Personally, I found the new feature to be annoying; as more often than not I pressed that key combination accidentally and deleted whatever I was trying to say. Prior to this key combination being added to the OS, if you pressed the Back key your message would be deleted - an option which many people used frequently. Now, when you press the Back button, you are returned to the main BBM screen and your message is saved as a draft. This is Handy in some cases, annoying in others. But hey, as long as you know what each function does, you can manage, right?

Well, let's make it a little more interesting. As I mentioned, in BBM, Shift+Delete will erase whatever you're typing, meaning, you have to retype the message from the beginning. This key combination will also erase the text field in the BlackBerry Browser. For example, if you're in the CrackBerry forums and you've chosen to reply to a thread, and quote a previous post, Shift+Delete will erase the entire text entry field -- the quoted post and your reply. That can be a real pain, especially if you've written a lengthy, well thought out response. However, in the Browser you can simply choose the menu key and paste the text back in; so instead of the combination being a delete command, it is instead a cut command. That's way handier than how BBM handles it, and I have to wonder why Research In Motion went in different directions with the same key combination. To make it slightly more confusing, Shift+Delete does nothing in SMS or email besides what the delete key normally does, which is erase one character at a time.

I don't mind the feature, and realize it could be useful for many people. I do believe, however, that it should be universal across the native apps. If I'm going to be accidentally deleting things, I'd like a way to put them back quickly and without re-typing the whole thought. Also, it would be nice if the function existed in other native apps such as SMS and email.

Got your own BlackBerry pet peeve? Sound off in our forums and let your voice be heard.