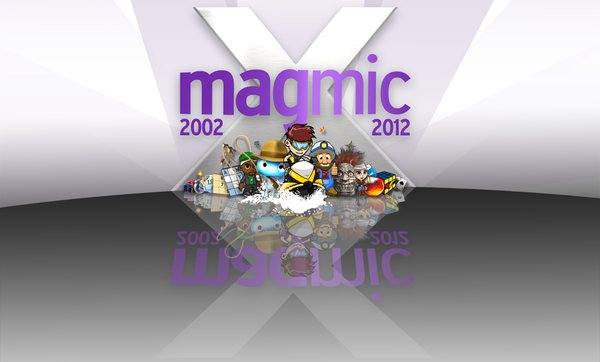 If you've been in the BlackBerry space for a while then chances are you've heard of Magmic or used some of their products in the past. They've launched some of the most popular themes and games we've happened to see (Remember Crossbar?) and now they're celebrating 10 years in the mobile space with some great contests and sales for all you BlackBerry fans! Some of the content on sale is listed below:

In addition to the sales they have going on, Magmic will also be holding Chip giveaways on Twitter & Facebook (1 Million & 10 Million) for Blackjack King and THK Live. Plus, they have plenty of stuff going on over at  their blog as well. Want more info? Hit the source link below. Congrats on the 10 years Magmic, here's to many more!

OTTAWA, ON -- Magmic Inc., a pioneer in mobile entertainment over the past 10 years, has developed and published hundreds of mobile products on multiple devices including BlackBerry, iOS, Android, Symbian, and Java. In the highly competitive mobile gaming industry, Magmic excels by pursuing a strategy of publishing both licensed,  brand name mobile entertainment products and developing original premium content; distributing titles across multiple platforms. We continue to keep pace with increased user demand by growing staff, adding to our portfolio of entertainment products, and expanding our reach on new platforms.

Magmic was founded in Ottawa, Canada in 2002 as the mobile industry was in its infancy. It wasn’t long before Magmic became the leading provider of premier entertainment content for BlackBerry. Since then, we have expanded our portfolio and brand across multiple platforms with over 2.2 million unique mobile users worldwide playing at least one Magmic game every month. 2011 was another banner year and we are ramping up to release some amazing new titles in 2012, including Blackjack King on BlackBerry, Ka-Glom on BB10, Wave Crasher on iOS, and a yet to be titled game on iOS in collaboration with ground-breaking graphic artist eepmon.

Magmic, along with Fuel Entertainment and Playbrains, is also gearing up to host the first ever Ottawa Game Summit, a professional development event taking place in May 2012. This is a collaborative effort with numerous game developers in the region, as well as Algonquin College, OCRI, EDC and the support of OMDC.

"This is a very exciting time for Magmic," said John Criswick, founder and chief executive officer, Magmic Inc. "We have accomplished a lot in last 10 years and I only see more success in the future. We will continue to market our top brands and expand our catalogue with new titles on iOS, BlackBerry, Android and even Facebook soon."

There have been many highlights throughout Magmic’s 10 year history. Our more recent successes in 2011 include:

•    THK Live, the most recent iteration of Magmic’s popular Texas Hold’em King franchise reached 1,000,000 users on BlackBerry in November 2011, is currently the #1 Card Game on the BlackBerry App World and was recently released on Android.

•    The New York Times Crosswords for iOS had 5.6 million different sessions this month and was released on Android, Amazon Kindle, Barnes & Noble Nook, and the BlackBerry Playbook in 2011.

To celebrate Magmic’s 10 Year Anniversary and milestones, we are discounting a number of our BlackBerry products including Phase 10, Rubik’s Cube, Cribbage King, Spades King, etc., as well as running contests all week. We will be giving away different BlackBerry Games and Themes including 0S7 Themes. In addition, we will also be giving away 10 million chips for Texas Hold’em King Live & Blackjack King on BlackBerry.

Magmic is a leading developer and publisher of mobile social games, apps, and entertainment. We publish a full range of content, from original titles including Ka-Glom, and THK Live to top licensed content from leading entertainment publishers like The New York Times Crosswords, Mattel, and Rubik’s Cube. We have led the mobile entertainment revolution since 2002, and currently ship products to all major app stores including; iTunes, BlackBerry App World, Android Marketplace and various carrier decks. Learn more at www.magmic.com