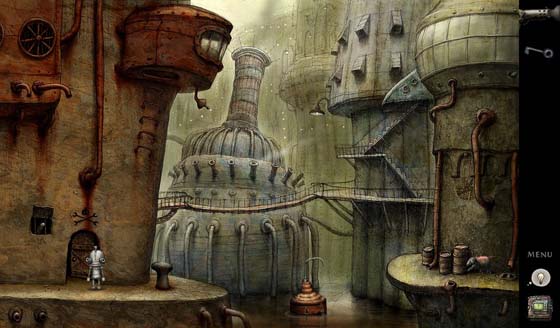 One of the most anticipated games for the BlackBerry PlayBook is Machinarium by Amanita Design. Shown off briefly at DevCon this year, it has just been released and I think it is everything we'd hoped it would be. Featuring rich, hand-drawn backgrounds, the overall feel of the game is vaguely steampunk, with your character a charming little robot in a world of robots, mechanisms, and puzzles.

Machinarium begins with your robot (named Josef, after the man who coined the word 'robot') being discarded on a scrap heap. Your goal is to guide little Josef through the world to confront the Black Cap Brotherhood and save his girlfriend. In the traditional "point-and-click" style, you gather and use objects close at hand to aid your venture. Hints are available in each level by clicking on the symbol with a lightbulb on the right side of your screen, as well as a walk-through that can be accessed by completing a mini-game. Don't be fooled however; the hints are not a blatant 'here is how you complete the goal'. Instead, Machinarium presents you with sketches of describing the puzzle and solution. This theme is carried out through the entire game, as there is no dialogue in either spoken or written form.

I am usually not a big fan of background music in games, but I found the soundtrack to Machinarium perfect for setting the tone of the game. If you enjoy puzzle games, this will be right up your alley. Machinarium is truly a game that will challenge you, but with patience and attention to detail, you can help Josef through the city to save his robot girlfriend.  You can buy Machinarium for $4.99 in App World at the link below, and check out some more screenshots after the break.