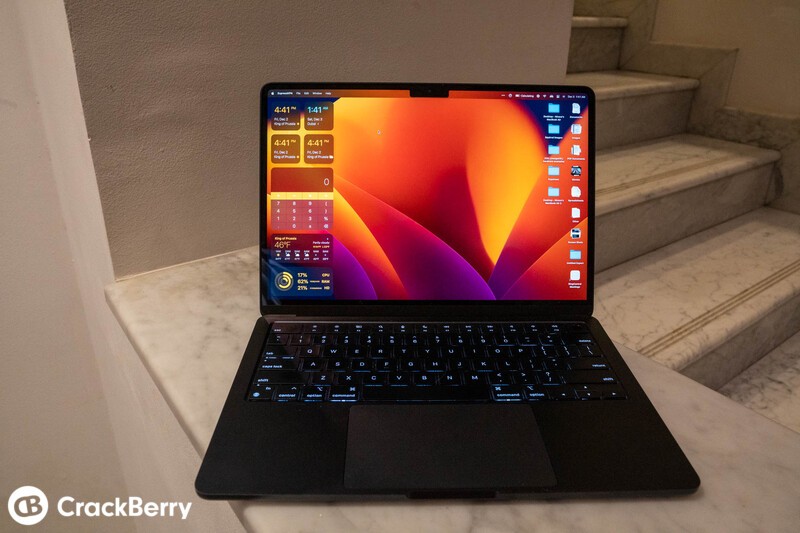 I'm a self-confessed MacBook fanatic. Ask anyone who's had this conversation with me, and they'll say that I'm very vocal in my dislike of Windows-powered computers, even though I've tried some great machines made by Dell, Lenovo, and Huawei.

A couple of years ago, Apple revamped the MacBook Air internals but, crucially, didn't change the overall design. The result was a machine that was completely out of line with the rest of Apple's design language, and specifically, it lacked that symmetry and squared design that I had grown so fond of with the 14-inch MacBook Pro.

That all changed this year, and the MacBook Air M2 bought almost everything I was waiting for. That gorgeous design language now came to Apple's entry-level computer, and coupled with the ability to add up to 24GB of RAM (which I did) and over 1TB of storage, it finally had enough to be the portable pro computer I was waiting for.

I switched over, and almost instantly, the way I used my computer completely changed.

Why I love and dislike the MacBook Air M2

Before the launch, all the rumors pointed towards the MacBook Air M2 coming in a range of colors similar to the vibrant iMac range. While that didn't happen, the rest of the rumors proved to be apt, and the result is the best computer – at least in my opinion – that Apple has ever made.

The MacBook Air M1 was powerful, but it struggled under my pro usage, even when I bumped it up to the maximum of 16GB RAM. As a result, I used my MacBook Air M1 for a while but then defaulted back to my 14-inch MacBook Pro, which has the M1 Max chipset and 64GB of RAM.

The M2 chipset transformed the MacBook lineup, which meant I could increase the RAM and take advantage of large increases in efficiency, power, and portability. Rather than the back-heavy tapered design of the MacBook Air M1, the new MacBook Air features an evenly balanced design that makes the entire computer feel far lighter than its predecessor.

The M2 chipset provides more power than I need, making me realize that I don't need a Pro computer most of the time. Even when I travel and plan to do light video editing, I'll still take the MacBook Air M2 with me over my MacBook Pro. As I write this, I'm on vacation in Dubai, and the MacBook Air M2 was an easy device to just throw in my bag and forget about until I needed it.

Apple's current color choices unfortunately have the by-product – at least in the midnight color – of displaying fingerprints and making it very hard to keep clean. No matter how much I clean it, the midnight color displays dust, grease and dirt far more than any other MacBook I've had, which is a shame as the midnight color is my favorite by far.

Adding the notch may be polarizing to some people, but much like the iPhone, you get used to it within days of starting to use it. The MacBook Air M2 will also not be for everyone, as Apple has seemingly limited the chipset to only support one external display, which means it can't be my main computer for all users. Yet, despite its limitations, the MacBook Air M2 is still the computer I use the most.

The MacBook Air M2 also bought back MagSafe charging which had a double effect of freeing up one port when charging, and also vastly reducing the risk of the MacBook Air accidentally falling when it was being charged. I love MagSafe charging, think that every computer should have a similar solution, and it also enables fast charging which means the computer can charge to full in a little over two hours which is fast enough for almost everyone.

The MacBook Air M2 changed how I use my computer

Why do I use it more than my 14-inch MacBook Pro – which is now relegated to barely being used and will probably be sold soon – and my expensive, top-of-the-line Mac Studio? The answer lies in portability, which made the MacBook Air range so popular.

Since I got the original MacBook Air M1, I noticed that I spent a lot of time using my computer while sitting on my couch. During this time, I was recovering from spinal surgery, which made it nearly impossible to sit on a chair for a long time; I found that where I would have previously used my phone, I preferred to use the MacBook Air and ultimately be more productive.

The MacBook Air M2 is easy and simple to use, and makes me far more productive.

The unbalanced weight distribution on the MacBook Air M1 meant that I went back to using my phone as it was easier, but with the MacBook Air M2, I now use it almost exclusively when I'm on my couch. A large part of what I do daily doesn't need two screens and can often be achieved on the smaller screen of my laptop, with two windows side-by-side and no room for distractions.

Rather than sit at my Mac Studio and sit there procrastinating, the MacBook Air M2 lives right next to my favorite seat on my couch – and often sits between the seat and the armrest – and I use it in short bursts. Doing something on my phone or Galaxy Z Fold 4 that needs more power and real estate? In seconds I'm on the computer, and the task is done. Easy, simple, and far more productive.

Instead of sitting actively at my desk and struggling through procrastination, I've found that I can be more productive in less time thanks to the portability of the MacBook AIr M2. This means a better work-life balance, achieving more, and, ultimately, being happier as I achieve all the goals I've set for myself.

The MacBook Air M2 is close to perfect, but like any product, there's always room for improvement. First, I'd love for Apple to finally support two external displays; this would mean I can use it when traveling to my family home in the UK, where I have the same 32-inch 4k monitors I have in the US.

To support this, it's likely that Apple would need to increase the RAM limit to 32GB, but doing so is unlikely as it removes yet another reason for someone to buy the MacBook Pro range vs the MacBook Air. Still, Apple has shown that it is listening to its customers, and I hope we'll see this improvement soon.

Like the iMac, the MacBook Air range is designed for average customers, and there's no better way to make it more appealing than to offer the range of colors that the iMac is offered in. The MacBook Air would look amazing in bright, vibrant colors, and it would also mean the computer is immediately noticeable when you see someone using it in a coffee shop, on the train or on a plane. It's not necessary, but it feels like something that Apple should be able to do in the next generation.

Lastly, the only problem I have with the notch is that Mac OS doesn't seem to block icons and the cursor from being hidden behind it. It's not a major issue, as I use the Bartender app to clean up all the icons and hide them behind a menu, but it would be nice to see Apple fix this, so icons and drop-down menus don't disappear behind the notch.

These are small gripes with an otherwise fantastic product that is easy for me to recommend to anyone needing a new computer. If the MacBook Air M3 were to offer the above, I would likely sell my Mac Studio, and it would become my only computer. This alone is a testament to the fact that it's not a pro computer, but it can enable anyone to become more pro in everything they do.

If you want to buy a MacBook Air M2, I recommend you go above the base 256GB storage, which is found to be slower than the 512GB and above storage options. It's available through Amazon, Best Buy, and all the other usual retailers, and we've already seen plenty of deals that reduce the base price further.

The best MacBook for almost everyone

The Apple MacBook Air is my favorite MacBook ever made, as it perfectly blends incredible power with fantastic portability. The changes made in this generation result in an evenly balanced weight distribution that makes it feel much lighter than it is, MagSafe charging for fast and safe charging, and the ability to add more specs than ever before in the MacBook Air.