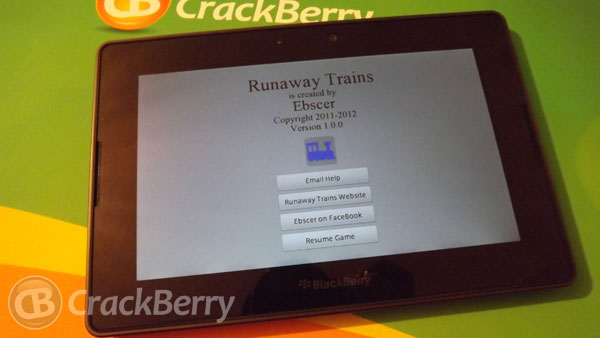 One of the most addicting games I have on my BlackBerry device is Xploding Boxes by Ebscer, so addicting that I also got it for the BlackBerry PlayBook. Ebscer have now released a new game that is just as addicting -- Runaway Trains for the PlayBook. It's a simple concept but you can find yourself getting carried away and losing 'track' of time.

Runaway Trains comes with the first 25 levels for free. After that you can get the rest of the levels through the in-app upgrade feature. Runaway Trains is a strategy game where you need to route the trains to the correct station, while at the same time avoiding a collision with other trains. With any puzzle game, each level gets harder and harder with more tracks and trains added to the mix.

The levels unlock 5 at a time. So, although you have the 25 levels free, you'll have to complete the first 5 in order to unlock the next set of 5. Although, since 5 levels are available at a time, if you find one quite difficult it is possible to skip that level. So long as it's not the level just before the next set of 5.

I have found Runaway Trains more challenging than Ebscer's previous offering of Xploding Boxes and I quite like that about this. I enjoy the challenging puzzle games. Game play is simple. Just tap the track intersection to toggle between the different paths to get the train to the correct station. As levels progress the tracks get harder and the trains come more frequently that it can become a real challenge to make sure the trains get to their correct stations. I have had quite a few collisions already and there have been lots of times where the trains have crashed as I've not changed the path in time. It can be both challenging and frustrating at the same time.

Along the top of the screen you have options for 'How to Play', Homescreen for level selection, About, Restart level and the option to upgrade to get the rest of the levels.

Overall, the app is very addicting and challenging. I like the fact that you get 25 levels free. It's enough to get you going and with Runaway Trains the levels are challenging enough from the get go that it would keep you busy for a while anyway. And the option is always there if you want to upgrade or not. I have already find myself stuck on a level but it makes me even more determined to complete it.

I have found myself already emmersed in to Runaway Trains, just like I have with Ebscer's previous game. It is a simple looking game without any fancy graphics but the game play will keep you coming for more. Download Runaway Trains for the BlackBerry PlayBook Runaway Trains web link