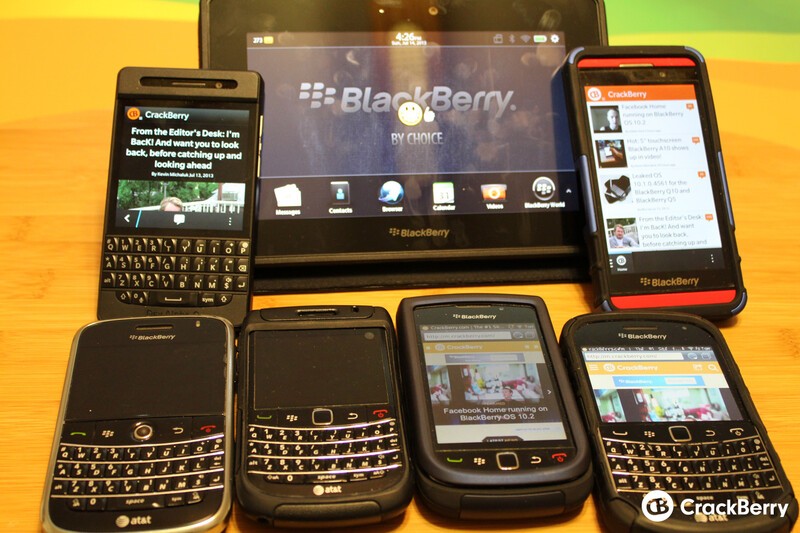 Reading over Kevin’s recent from the editor's desk about looking back, it triggered a memory. As a writer, there are posts and stories I’ve started only to be forgotten and abandoned because of work, life, or other interruptions thrown my way.

It’s not an uncommon occurrence, so I rummaged through an old notebook from the time of Hurricane Sandy and discovered a partially completed post written during the super storm with pen and paper and only candlelight to see (didn’t want to waste valuable battery power on my PlayBook or Bold 9900). The nine days without electricity afforded me the time to reflect on my time with CrackBerry, why I switched from a dumb phone to BlackBerry in the first place, and how I was looking ahead to the release of BlackBerry 10.

What you see below is a reproduction from my notes while sitting on the living room floor pondering over the reasons why I continue to use BlackBerry. While it’s a little late, I can’t help but think how I started out as a mild mannered administrative professional who was plucked from obscurity because of my love for my BlackBerry Bold 9000 and my passion for a contest held by CrackBerry.

Shoutout to @CrackBerry's passionate @azeis@scaperfan for covering BlackBerry news no matter what. Hope you are alright

This tweet says it best.  When it comes to high stress situations I’ll be the first to admit that while I can get things done sometimes I’m a mess on the inside. The one thing that kept my head on my shoulders was finishing my posts for CrackBerry. No power, internet, or cell service could stop me from finding WiFi service at Starbucks. Putting pen to paper (literally) to get my thoughts out and upload them for the CB community was not only calming but helped focus my attention on important matters.

In the aftermath of Hurricane Sandy, needless to say, the cell towers in Long Island, NY were obliterated. So when I finally noticed a bar or two pop up, my BlackBerry let me BBM, text, and email my friends and co-workers and acquaintances to see how they were and vice versa. It also let me keep in touch with the CB team. Even friends overseas were able to get through to make sure I was okay and I thank everyone for the support and wishes.

In the two short years since CrackBerry Idol, my BlackBerry is not just a tool but brings with it a whole culture. I’m proud to be a BlackBerry owner. I’ve met such a wonderful group of people (i.e. developers, forums members, Mobile Nations staff, and Twitter/Facebook friends) that I wouldn’t trade this opportunity or platform or anything else.

Throughout this whole ordeal it was my BlackBerry Bold 9900 that kept me sane. Whether it was tweeting friends, texting co-workers, submitting a power outage complaint to Long Island Power Authority, or keeping track of the storm, my BlackBerry was more than just an organizational tool and flashlight but my lifeline to the outside world.

Normally, I’m an extremely shy person (no really). The thought of making videos, publishing my writing, going to CES or even attending BlackBerry 10 Jam would have been a foreign concept to me just three years ago. How many people can say that a BlackBerry changed their life? Originally, I scoffed at the idea of owning a smartphone and discovered CrackBerry when my Mother picked up the Curve 8310 and needed help.

So after being jealous of the keyboard, I inherited her Curve and the rest is history. When a contest popped up on the homepage about CrackBerry Idol I think I hesitated and waited until the last possible day to submit my entry. I probably went through twenty different takes but it worked. I mean how else can I explain running around Manhattan and filming the Dragon for email video in Rockefeller Center. It was my devotion and passion for BlackBerry that helped overcome my fears.

As someone who used to be scared meeting new people, the opportunity to go to CES and BlackBerry 10 Jam NYC. There are no words to describe the experience. Not only was I able to meet Victoria Berry and Alex Kinsella (after two events I am now declaring myself his personal stalker) and the rest of the team at BlackBerry and they are wonderful people. Not to mention everyone I met there including bloggers (from other sites) and developers from all around the area. All of the people attending the event that day were great and it only made me more excited about coding and for the arrival of BlackBerry 10.

Looking back on these last two years I’ve gone from a shy office worker to being more confident, interacting with an amazing community, and a chance to develop for BlackBerry 10. I owe it all to owning a BlackBerry device that I admit was reluctant to switch to in the first place.

My (ex) boss said it best when last we spoke before I headed off to my new job. The first words out of his mouth were that I would miss fixing all of the office BlackBerry devices. This just shows how my device has become embedded in both my personal and work life. Ironically, this was the same man who gave me an Apple gift card for Christmas in the hopes I would switch platforms.

As I look back on the past it is time to look forward to 2013. I can’t wait for what BlackBerry 10 has in store for us all.

While months have passed since I initially put these thoughts to paper, my position remains the same, even more so since attending BlackBerry Live and hanging out with the CB crew. During this time I accomplished my goal of coding an application and as you can see from my posts I'm very proud of my Limited Edition Z10. It's something I couldn't even comprehend doing a short while ago.

While I considered rewriting this piece to fit the present day, I chose to leave to alone as the message still holds true. My BlackBerry smartphone changed my life. As I said before, this rollercoaster ride is an experience I wouldn't trade for anything else. I look forward to what BlackBerry and CrackBerry has in store for us this year and in the years to come. For those following along, the aforementioned gift card remains unused in my desk drawer.

Feel free to share your thoughts in the comments below.