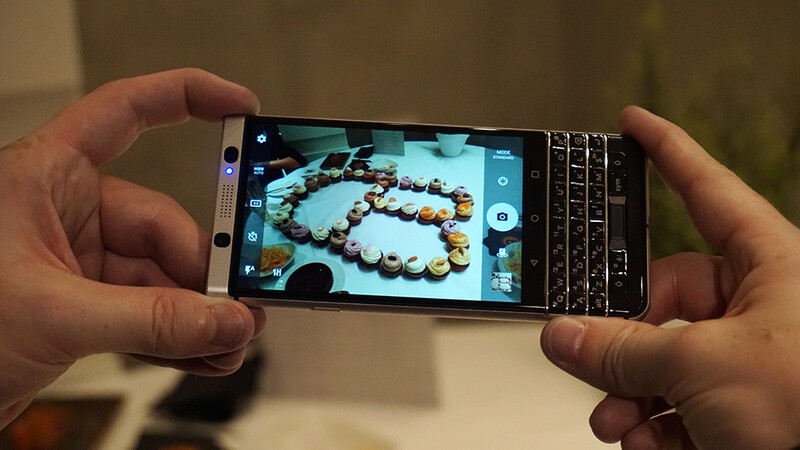 Flying into Barcelona was a convergence of sorts. Numerous Mobile Nations ambassadors, moderators and select CrackBerry members all braved the long international trek. We gathered in Barcelona to celebrate the 10th Anniversary of CrackBerry on the eve of BlackBerry Mobile's launch for KEYone. As teased on the CrackBerry reunion podcast 001, the then 'Mercury' was going to make a special appearance pre-launch and everyone was anxious to socialize and go hands-on at the CrackBerry Meetup.

Accommodations were coordinated brilliantly; everything was thoughtfully organized. I flew in with one of the first waves. About five of us all shared a plane from JFK to BCN. After seven and a half hours in the air, we stepped foot in Barcelona. It was comfortably cool when we arrived and, while physically exhausted, the hype was starting to set in.

We met up just outside the gate and introductions were hardly needed, as we all had BlackBerry devices in hand. In fact, before takeoff, I tweeted about seeing a man with a BlackBerry Passport SE. Later, I saw the same man walk up to me and introduce himself as Ethan, known here in the forums as Mainley_linux. We were joined by BigBadWulf, Denise in Los Angeles, and Michelle H. It finally settled in, that a serious BlackBerry meetup was about to go down. The good ole days were back indeed.

We made it past customs, had our paper passports stamped and made our way to a taxi. It was early in the morning at this point, and our group was ready for hot showers and check-in. Hailed the cab, drove about 20 minutes and the morning fog transformed into a light drizzle. The rain framed the morning scene well, the feeling of renewal and a fresh start filled the air as we continued to build rapport with one another while staring out the cab window taking in every sight of Barcelona we could.

The landscape was rolling hills. We ascended small knolls as the roads twisted and turned toward the heart of the city. Our hotel was in a gorgeous area between the hustle and bustle of Friday morning traffic. Scooters shot between lanes, cars honked and we scanned the streets looking for a familiar brand. We arrived at a discreet location right off a big roundabout. The hotel was a contemporary building tucked between shops and loft apartments. The faint drizzle from above had the sky painted a stark grey. We pulled our luggage from the trunk and stood on the wide sidewalk taking in our locale. We had arrived about 2 hours earlier than check-in, but CrackBerry Kevin met us in the lobby and greeting us with tiding of breakfast up on the 9th floor. Others who had flown in earlier met us there. "You've got to try the jamón ibérico," Rico, a semi-local BlackBerry fanatic from Madrid, said. We took his advice to sheer delight. This was the perfect post-flight pick-me-up.

On the rooftop terrace, we took in marvelous views of the city. To the south, we could see the Mediterranean peaking out between buildings. To the North, a castle atop a small mount. Between all of this were multistory buildings for businesses, housing and more. Brick and stone and glass covered the skyline, and there was a soft buzz of city dwellers moving about, sipping espresso and laughing in earnest.

A few from the crew arrived at the venue early. Already there were patrons outside waiting for the festivities to begin. We booked a private section at the back of a restaurant called Barcelona Milano. The atmosphere was fresh and modern - well lit and thoroughly inviting. The long building had us walk past tables, bar tops, and a large open kitchen. We were nestled in the rear in a cozy section walled off in frosted glass. Waiters set up tables and laid out glassware. We proceeded to set the stage, magically setting up a CrackBerry-branded backdrop and designer cupcakes purchased from a specialty shop hours before. We laid these sweet morsels out in the shape of the CB logo, naturally.

Highlights from our Barcelona CrackBerry Meetup:

As guests arrived, the party got going with a toast. CrackBerry Kevin raised his glass and with a cheers, we celebrated an incredible milestone - 10 years on the eve of a next generation device launch. Shortly after the toast, we all took turns taking pictures with thoughtfully designed social media frames. We also got our hands on the KEYone. At the time, we didn't know the official name, but we played with the hardware and snapped dozens of photos posing with the device and relished in the social engagement.

Members from the Android Central team were in attendance as well as locals. Balancing out the BlackBerry fandom were guest appearances from the likes of Steve Cistulli and company whom we've spoken with previously on our CB 10th Anniversary Podcast. The BlackBerry Mobile crew answered questions and shared their enthusiasm for the new device while confirming minor details about points of inspiration in the design and functionality of the KEYone such as the camera specs and aesthetic changes BlackBerry Mobile made, like making the keyboard frets pop with chrome accents.

The food was delicious, the company inspiring and overall, there was no better way to build up energy and excitement for the device launch the following evening.

We nestled into the gorgeous Marquee venue which is situated on a historic side of Barcelona with botanical gardens - media and VIP guests all packed in front of the big red gates awaiting entry. Once we were allowed in, the energy immediately spiked in the crowd and everyone went into work mode. Photographers rushed to the front to get better placement for their shots and we funneled toward check-in where we were presented our press badges.

There were hundreds of press people clustered together in front of the main stage with loads of camera men and equipment lining the back of the venue. The lights were low and tints of neon blue set the mood as the final members of the press made it to their seats. Bla1ze went to work firing up the CB live blog. I walked the room grabbing pictures and video, making my way back to my seat just before the presentation kicked off. Once CrackBerry Kevin took the stage as the MC the show began. You can watch a replay of the live-stream to look back on the broadcast:

Everyone in the room appreciated how concise the introduction was. The device was handled at CES months before, so BlackBerry Mobile was efficient in their presentation and moved to allow everyone the direct hands-on time they came for. Kevin put up a great retrospective look at the event you should read for added context on the intricacies of the event.

I've sat through my fair share of BlackBerry device launch events, and almost always after the main presentation, there's usually a 45 minute panel where specialists/experts talk on end about minor aspects and use cases for the given release. I was absolutely pleased that this was skipped. Instead, the experts met us behind the stage at the after party where we could more effectively interact, ask questions and actually get a feel for the KEYone. Beverages, great food, good music and even two light boxes were set up so that the media could actually get clear pictures and video of the KEYone; these were nice touches that went well appreciated. Event staff were friendly, knowledgeable and eager to share finer details about the KEYone.

An incredible thank you to BlackBerry Mobile for having us in attendance. Getting to celebrate 10 Years of CrackBerry with you and the launch of the KEYone is truly a unique experience we're all thankful for. If you're looking for even more clips from our time in Barcelona, check out our mod pkcable's video that takes you through Barcelona in just one minute: