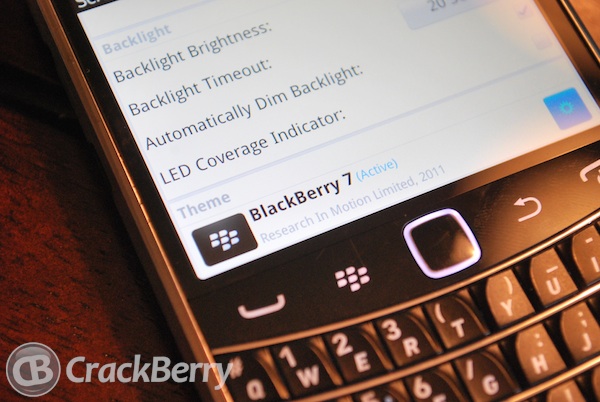 One of the great things about current BlackBerry smartphones is the level of customization. Not only can developers provide apps that let you add all kinds awesome features to the OS, but you can also customize the look and feel of your device with a BlackBerry theme. Since the early Curve 83xx series came about, we've been able to download and install custom themes that skin the OS to give it a custom look and feel. A theme provides a way for you to have a unique look that breaks away from the stock OS. Originally there were only a few styles of themes available, but now with theme developers all over the globe, hundreds of different themes can be found in all colors, shapes and sizes. Keep reading as we take a look back at the history of themes on BlackBerry.

A Look Back At BlackBerry Themes

At the start, the 88xx and Curve 83xx series offered a few preset themes depending on your carrier. Prior to OS 4.3, most devices allowed for a choice of Zen, Icon or Today theme. While these were different, they didn't give a great level of customization aside from moving icons around. With OS 4.5, the "L" theme was introduced, adding yet another option for users.

For those wanting a bit more, many BlackBerry users realized that buried in the OS were actually vendor themes from other carriers, only they were locked. To open them up for use took a bit legwork, but once completed gave you some great custom theme options. You essentially needed to edit a file in the OS, change around some vendor ID's and run things through Desktop Manager.

Once successful, you now had a bunch of different themes -- all in carrier colors -- with which to use on your device. It wasn't the greatest option, but it gave you a bit more power in how your OS looked and made you feel special at the same time.

Next came custom themes. Thanks to the Plazmic Content Developers Kit (the predecessor to the BlackBerry Theme Studio) we had the ability to create custom themes for devices including colors, icons and more. Some devices even needed special software (Plazmic Reader) for themes to work properly. There were a handful of theme developers who cashed in right off the bat creating some awesome themes for devices. At this point in time, it wasn't uncommon for developers to charge $4, $5 or even up to $10 for a well made theme (man, how times have changed).

Most themes were available as a desktop download and needed to be installed via Desktop Manager, while others provided an OTA (Over The Air) link so you could install the theme right from your device.

These themes were pretty basic compared to ones we see today. The kept the same basic flow of the Zen, Today, L or Icon style, only adding in custom colors and replacing homescreeen and banner icons.  At the start, many themes had "locked" or "docked" icons - meaning you could only use the theme as the developer intended. The homescreen icons were locked and couldn't be moved or rearranged at all. Others (which we obviously more popular) had customizable icons so you could move them where you wanted on your homescreen. Now they look really dated - just check out the CB 2.0 theme.

The next wave of themes took things to another level that BlackBerry users had not seen before. It was themes like Crossbar and FlowBerry that really showed off what could be done.

Along the way things progressed non-stop. We saw new, custom icon layouts, fancy homescreens, the "weather slot", animated themes and much, much more. There are themes that looks like other platforms, movie themes, music themes, sports themes ... you name it. There seemed to be no stopping theme developers from coming up with the next best thing for BlackBerry themes either - always seemingly trying to one-up each other with cool features hidden inside. So many themes were being produced that we had to spread the love in the CrackBerry forums and even move to a Theme Roundup instead of just solo posts for themes.

No Themes on BlackBerry 10

With the introduction of BlackBerry 7, themes were nowhere to be found. It was unknown at the time if RIM would even release Theme Studio for BB7 but some developers figured out how to make BB7 themes using the old Theme Studio. Then again, the theme builder was notoriously late to launch. At first things were slow, but as the days went by, more and more theme developers were cranking out some really great stuff for BlackBerry 7 devices. It looked like theming wouldn't slow down at all without a proper Theme Studio ... and that was the case until recently when RIM announced there would be no Theme Studio for BlackBerry 7 and also that BlackBerry 10 devices would not include themes at all. One of the few things we'll miss on BlackBerry 10.

While we lose some of the customization without themes, I think that BlackBerry 10 will still be amazing just the same. Maybe if we yell loud enough at RIM, down the road we'll see themes on BB10 (or maybe BB11??). I do like the ability to customize my BlackBerry how I want it, but I really don't think that losing themes will mean that much in the long run. Will it suck for some people? Sure, but think of all the amazing features you will have on BlackBerry 10 to make up for it.