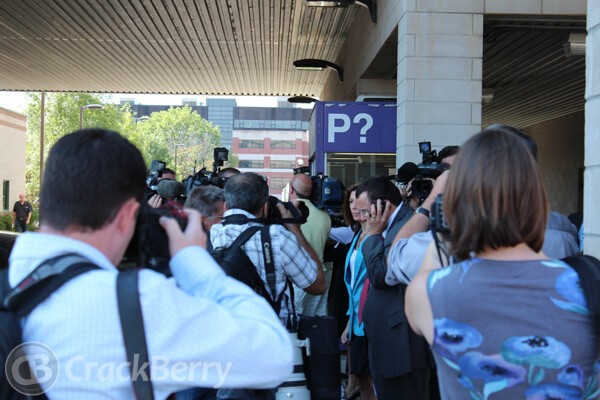 Just a quick update for all the CrackBerry readers out there who are going to be paying close attention this Thursday to BlackBerry's earnings report and Annual General Meeting of Shareholders.

I originally planned on making the trip to Waterloo for the event as I have the past three years so I could attend the AGM in person. Unfortunately, turns out I forgot I have my own AGM to attend on Wednesday night that I can't miss which screws up getting me to Waterloo in time for the event (advice: avoid being President of your condo board at all costs).

However, we'll still be sending the incredibly tall and BlackBerry-loving Simon Sage to Waterloo for the day, so CrackBerry will be in the room to witness things first hand. And with both the earnings report and AGM being broadcast via webcast, the rest of the CrackBerry team will still be here on the site helping with the coverage remotely. We'll be reporting up the news as it breaks, live blogging everything (you can join in on the chat!), and we'll fire up a video podcast as soon as the AGM is over to talk about everything that went down. Once the dust settles, I'll also be recording another Vector podcast with Rene Ritchie to deep dive into it and talk about the state of BlackBerry (these shows have always been a big hit whenever we record them).

As for getting answers to all those questions you want us to ask BlackBerry executives, we'll do our best but take note that this year is going to be a little different. Unlike previous years where there was only the AGM, this year BlackBerry is also reporting their earnings on the same day. This means BlackBerry CEO John Chen and team are really booked up for the day: earnings call, AGM, company-wide town hall meeting, directors meeting... it will be non-stop for them. Following the AGM there is a press scrum where Simon should be able to work in a question or two. Hopefully most of the community's lingering questions will get answered by the time the day is through, but it's not likely that we'll have any quality one-on-one CEO time this week.

I'm still planning on making my annual pilgrimage out to BlackBerry this year, but am thinking I'll do it in the fall instead, maybe when, you know... there's some new BlackBerry hardware to check out. Maybe I'll even bring Bla1ze with me for extra fun. Or wait, maybe it's that I'll be going with him there?! ;)