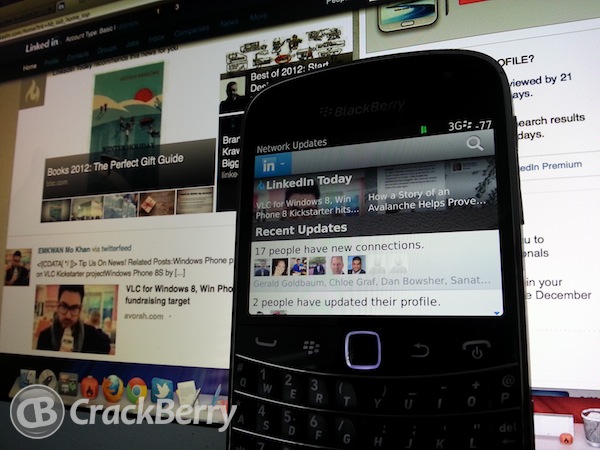 LinkedIn got a welcome update over the weekend to version 2.1.0.37 but unfortunately the improvements were pretty minor. The new features just include contact sync & login improvements and although this is a step in the right direction it isn't quite enough for me.

While it is great that we now have a LinkedIn application for BlackBerry smartphones it's still lagging behind in terms of functionality compared to the Android and iOS versions. What I need from the app is proper notifications. If I have the app on my BlackBerry I don't want to get and email telling me I have message - I want the app to tell me and give me a Splat.

Clearly things are going to change with the arrival of BlackBerry 10 as LinkedIn integration is built into the OS the same as Facebook and Twitter, but considering that BlackBerry 7 is going to be around for some considerable time I would like to see a bit more from the BB7 app. The lack of notifications may well be down to the fact that the app is not built by BlackBerry but if other non native applications can give notifications surely LinkedIn can too?

Let's hope things improve for BlackBerry 7 users in the near future as currently I don't find myself using the app as much as I would like.