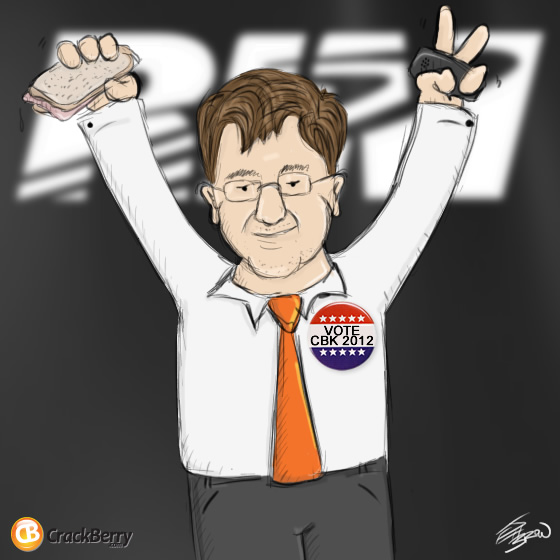 Kevin and a Ham sandwich have a better chance of buying RIM over these guys...

NEW YORK, April 5, 2012 (GLOBE NEWSWIRE) -- United Vision Marketing Firms CEO announces today that they are making an offer to Research In Motion (RIM) to acquire its Black Berry assets. The decision was made to acquire RIM after a strategy session with UVMF's board members and consultants and the announcement by RIM's new CEO of a possible sell of the company. The proposed deal is an all stock swap deal that will position RIM shareholders to be in a greater equity position by swapping for UVMF's IPO stock price.

The team at UVMF feels the move is perfect timing on how to better leverage itself against other device makers. The deal will help the development of UVMF'S $1.6 Billion proposed Pearson Education Tablet (PET), take UVMF public and develop a new brand imaging campaign for BlackBerry Products using UVMF's entertainment ties.

UVMF is a much smaller company but is best known for its big ideas. One of the key innovators is the self proclaimed Dr. Nono C. Pearson who is the founder/ CEO of the firm. Dr. Pearson, who was born on Flag Day, started his career in music as a D.J. producer and song writer. Since then he has started and predicted new trends that have gone on to become the biggest in history and some of the worst trends in history, like our current economic crises.

One trend that Dr. Pearson has been more vocal about in past interviews is what he called "making country cool" in rap music. This was at the time when the east and west coast rap music ruled the air waves. It's now documented that the "make country cool" movement in rap music has sold over 78 million records for the recording industry.

Now the 37 year old innovator is headed to Wall Street with the copyrights to prove that he is the owner of what he calls "Corporate Hip Hop" and once again he is pushing the concept through the entertainment business.

UVMF signed up a multi-platinum selling rapper to help set the trend that will help develop the market and leverage the acquisition deal. Some analysts are saying the deal is a good move as the "innovate or die" culture continues to proliferate on Wall Street says UVMF insiders.

"From day one we have been positioning United Vision Marketing Firm to be the Apple of the future in terms of out innovating the competition by continuously focusing on the best technology, creativity and delivering socially relevant content." says Eze Redwood COO of UVMF.

Unlike much of the competition UVMF has a huge portfolio of socially relevant ideas to bring to market that will totally monetize its business model beyond advertising revenue.

"In past bubbles we have seen many firms receive high valuations without having a true business model for sustainable growth. This model is what caused the final domino to fall in 1929 to create the great depression, shortly after a temporary credit fix that eventually came to an end. We are continuously hyping economic predictions in sectors such as education, technology, and finance; in which there are little to no real sustainable growth strategies for the future. Most of our youth are unengaged with many of these products or simply just can't afford them. Soon the bottom will fall out of that trend if we don't face the truth. United Vision Marketing Firm has the innovative business model to help create real sustainable growth for our clients. Our most valued asset is having the human capital that has the passion to actually go out and develop the markets. We fully understand having that kind of leverage alone is priceless." Says Dr. Nono C. Pearson CEO of United Vision Marketing Firm.