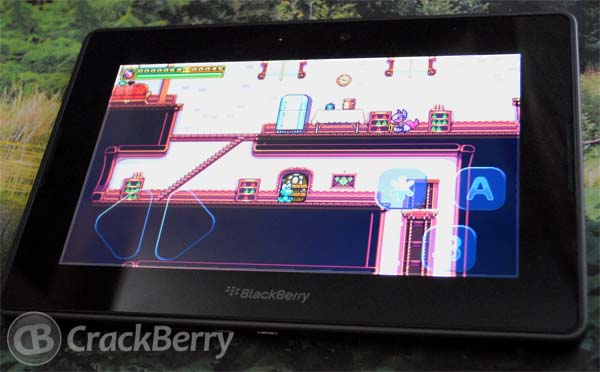 Last week at the Game Developers Conference, Research In Motion showed off a fun modification of the BlackBerry Remote, using it to control a game on a PlayBook that was displayed on a larger TV. Of course, the main story was about the modification, which was actually a d-pad controller designed by an engineer at RIM. However, there was a lot of discussion surrounding the game that was being played in the picture, and with a little research (thanks @Alexkinsella!) we found out the name of the game was Frogatto.

This game is a classic side-scroll 2D platform game where you are Frogatto, a cute little frog on a mission to find, of all things, a job. Along the way to the town you will find adventure as well as things to buy, puzzles you have to solve, and more!  There are a ton of levels, and lots to do and see in the game so this is one that should keep you occupied for some time. It's also great for all ages though there is a bit of reading involved so younger kids may need a bit of help.

Developed by Lost Pixel, Frogatto wasn't available last week when we saw the demo, but as of today you can pick it up in BlackBerry App World for $4.99 for your BlackBerry PlayBook (which is the same as it would cost for an iOS device, by the way).

For more information and to purchase Frogatto