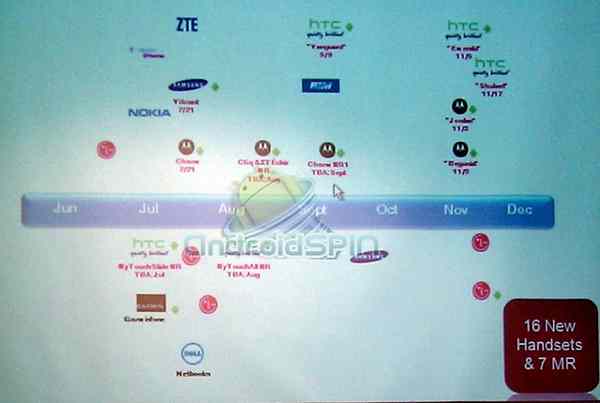 Ahh, roadmaps. Sometimes they are great in giving us a few at a lot of upcoming devices for some carriers and other times they fail to deliver on the real details. This one, while interesting fails to deliver for us in the BlackBerry world. While the focus here from the source Androidspin is that of well..Android devices we here at CrackBerry couldn't but help notice that RIM logo sitting amongst the crowd.

Sadly, the leaked road map lays no claim to which device exactly it is that we should be on the lookout for. Given a guess, I'd say it was most likely to be the BlackBerry Pearl 3G but that, has been brought under fire by a few of my colleagues who shall remain unnamed so as to not tarnish their rep. However, if I'm wrong-- which I could quite possibly be, I'm not gonna worry about it too much cause really I'm hoping for it to be something a little more interesting than a device I've had for over a month now.

So that said, what device do you all think it may be? Maybe something with BlackBerry 6 on it? I truly hope so. Possibly the BlackBerry Pearl 3G? It's certainly possible considering no US carrier has launched it yet. Sound off in the comments and here's to hoping it's some super, duper secret device that RIM has kept hidden in the deep, dark bowels of Waterloo never to be seen before unless called upon.