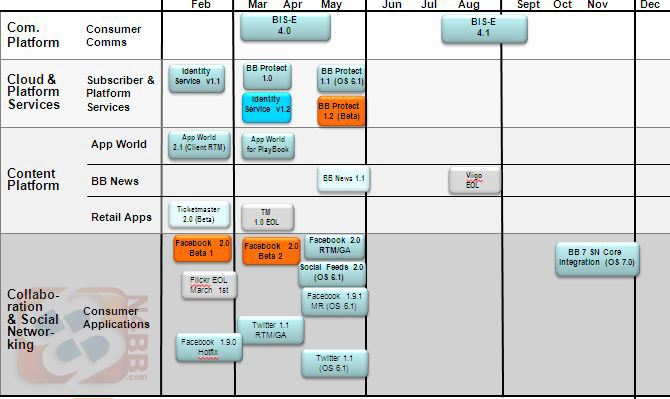 There's nothing better than leaked BlackBerry info on a Saturday! These new 2011 BlackBerry Software Roadmap slides (more below) show off some interesting details. Most of it is pretty basic and what you'd expect - updates to apps including Facebook, Twitter, Ticketmaster, Social Feeds, App World, BlackBerry News, etc.. Ugrades to BIS are also coming.

The most exciting item listed on the Roadmap above of course is the one coming last in the year, and that is BlackBerry 7 core integration. Though no other information is provided, you almost *have to assume* BlackBerry 7 would be the jump from the traditional BlackBerry Operating System we know and love (and occassionally hate on) to the QNX-based operating system that is used to power the BlackBerry PlayBook's BlackBerry Tablet OS. It makes sense RIM would go with a branding jump from 6 to 7 for a BIG OS change like that in BlackBerry Smartphones (especially considering we're about to see the move from BlackBerry 6 to 6.1). But who knows. It's early days and RIM has a lot of work ahead of them in pushing the PlayBook to market and building up that platform so it works in BlackBerry Smartphones as well. But damn... I have goosebumps. BlackBerry SEVEN. Exciting stuff. :)