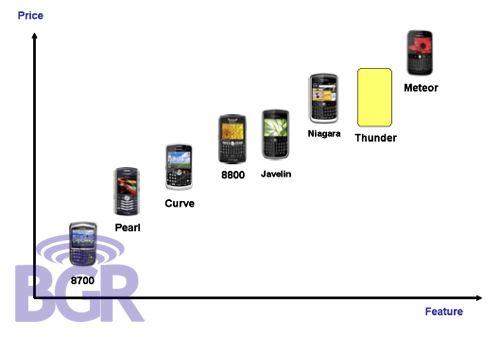 [ Update from Kevin - OK.. so apparently BGR and BBNews got their hands on the same information... as I was blogging this post from BG, Bla1ze was blogging it from BBNews.  Since we're all BlackBerry Crazy and it's the weekend, we'll just leave both posts up. Sorry for the confusion! At least you know CrackBerry.com has got you covered no matter where the information originates!]

When it rains it pours... as promised, BGR has followed up their BlackBerry Storm Presentation post with a ton of information coming out of some leaked RIM internal documents. The info is a bit on the old side (it calls for a September targeted launch of the Thunder), but does get into some awesome details on RIM's product positioning both internally and against the competition. There are also some new bits of info that us CrackBerry Addicts haven't heard yet... enter the BlackBerry Apex (codename), which is a CDMA version of the Pearl flip phone. Also, word has it that the CDMA Niagra (next-generation Curve) will feature WiFi.

There's seriously a ton of information in here... so go take a read and report back with your findings and comments!