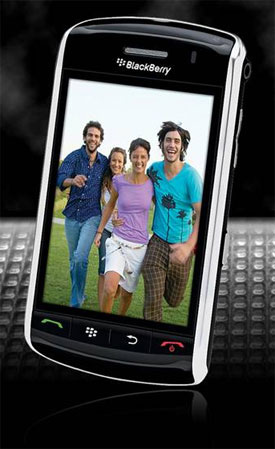 Like the true addict that he is, Kevin just sent me over the latest 'Verizon Talk Up A Storm ' document, right from the airport... It's hot off the press!

Unrelated Semi-Sarcastic Note: Wow, look at how happy they look in the promo picture. They sure look pleased to be having their picture taken by a Storm!

When we launch the world’s first touch-screen BlackBerry – the Storm – it will boast a 3.2 megapixel camera.

Storm's high-quality camera and camcorder, along with BlackBerry's reliable email features, make it the perfect device for anyone who wants to carry a mobile phone, camera and laptop all in one device.

And don't forget, it all runs only on America's Largest 3G Network – because a device is only as good as the network it's on.

A look at what makes the Storm's camera and camcorder features unique:

Talk Up A Storm - 3.2 Megapixel Camera and Camcorder

Stay tuned for another Talk Up A Storm feature next Wednesday!

Can't wait till next Wednesday... Talk About it in the Forums >>