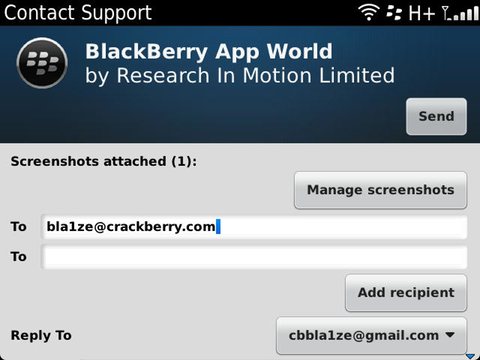 If you updated to BlackBerry App World v3.1.0.56 then you're already aware of the new features RIM has buitl into the app such as wifi support, gifting of apps and more. However, a few things they didn't mention built into BlackBerry App World is the new support features. I suppose this may be because they'll only be used under certain circumstances but they're there and pretty cool. There is two that have been found but there may be even more:

It seems to work on all builds of 3.1 App World but again -- not sure how useful it may be to the everyday user. The more interesting part here is that RIM has actually included a screen cap utility. Seems to me they should take this feature and make it a native app within the OS. Plenty of screen cap utilities exist but hey, having it there out of the box would be nice.