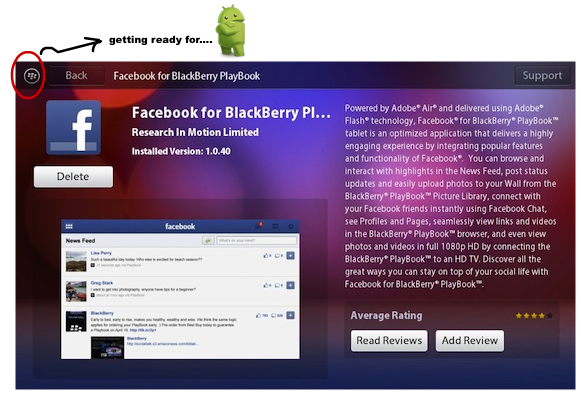 This morning's BlackBerry PlayBook OS update brought with it a number of feature improvements, most of which were highlighted in the update note RIM sent out. But beyond that, keen eyes have been observing other changes, some of which are pretty noticeable (like the big boost of free working memory) and others which are more subtle.

One of these subtle changes is the new BlackBerry logo that's popped up on app pages within BlackBerry App World. Looking at the image above, what I'm talking about here is that little guy in the top left corner. That wasn't there before. Now it's there. WHY??! To me the reason for this addition is pretty logical. It's in preparation for the support of Android apps on the BlackBerry PlayBook. Remember, Android developers will have to submit their Android apps to App World (effectively making them BlackBerry developers and BlackBerry apps), but since the apps will run via the Android App Player, it's important that RIM denote within App World to customers what it is an Android app vs. what is not (especially since based on the demo we saw it seems like you may initially be only have one Android app running at a time in the App Player). I'm expecting that once Android Apps showing up in App World, you'll see this new little BlackBerry logo turn into an Android logo for Android apps.

I guess we'll know with time... but I'm betting that's the case (if I'm wrong we'll make up for it with a contest). So what do you think? Android logos coming soon to a BlackBerry near you?