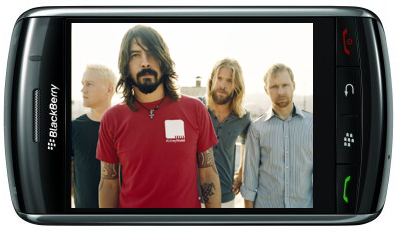 Woah... now this is kind of crazy. I received a couple of email tips on this last night, plus it's posted in the CrackBerry Forums AND it's posted at The Scenestar...

The word is there is going to be a BlackBerry Storm Launch Party tonight in Los Angeles that will feature the Foo Fighters and Queens of the Stone Age in action. Wicked! The best part isn't the entertainment though... it's the fact that every time we report on a Launch Party those in attendance have either received a free BlackBerry or an IOU for a free BlackBerry when it becomes available. If any of you get lucky and attend, be sure to report back to us with photos and commentary on the event. You can click the image above for more details. And for those of us who are not attending, at least we can take this as a positive sign that the launch of the BlackBerry Storm is on track!

Update: Sounds like there's going to be a Vodafone BlackBerry Storm Launch party in LONDON tomorrow too! *