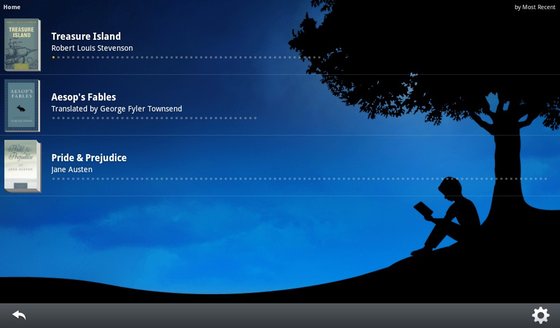 Now that the developer build of the PlayBook OS 2.0 is out, many folks have been also testing the Android Player Repackaging Tools. There is a great guide in the CrackBerry forums showing just how to convert Android .APK files to BlackBerry PlayBook compatible .BAR files and one app that a lot of people are being drawn to is the Amazon Kindle app.

Since we know Amazon will be releasing the Amazon Kindle Fire soon, there priority of launching a native PlayBook version of Kindle is probably pretty low on the list but no matter. When converted to a .BAR file, the Kindle for Android app instantly becomes a Kindle for PlayBook app that functions pretty flawlessly. You can login, see your library and read books as you would expect.

If you're looking to try it out, you'll need the developer build of the PlayBook OS v2.0 installed and since the conversion was already done in the CrackBerry forums, you'll be able to install it easily without the need for doing the conversion yourself but the guide is there should you wish to try out other apps. You'll find Kindle and many other free Android apps already converted for you.

Learn more in the CrackBerry Forums