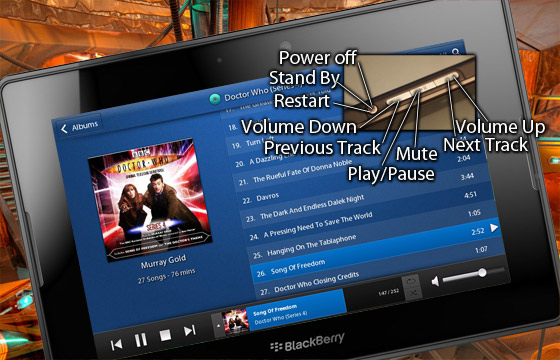 The BlackBerry PlayBook doesn't exactly have a keyboard. Sure there's a virtual one, but it doesn't do a whole lot of tricks as of yet. Where your standard BlackBerry with a QWERTY keyboard has somewhere in the neighborhood of forty-five keys on it, the PlayBook has four. Nevertheless, the PlayBook has some cool tricks you can do with those keys.

The power button, though difficult by design to press, does a few cool, power-related shortcuts. Pressing the button once will put the tablet to sleep (Research In Motion calls it Stand By); pressing it again will wake the device (though it's much easier to simply swipe bezel to bezel). Holding down the button for about five seconds will open a pop-up window giving you the option to Turn Off or Restart the device. If you continue to hold the button, the device will power down.

The play/pause button seems straightforward. If you're watching a video or listening to music, pressing this button will pause the action. A second press resumes the media you were enjoying. This button works for all of the apps found in your media folder. Hold down this button for a moment, and you've found a quick way to mute the PlayBook.

Volume +/Volume - Yeah, there's a trick with using these, too. Obviously, the buttons raise and lower the volume on the tablet, but they can also be used to skip to the next or previous track. Much like the controls in A2DP Bluetooth headsets, holding either of the keys for a moment is enough to change tracks. If you've played your media file long enough, holding the Volume - key will jump back to the beginning. A second press and hold will skip to the previous track.  Holding the Volume + key will skip ahead to the next track. And of course, pressing these two keys at the same time will take a screenshot.

Except for the power button tricks (and the screenshot), I found all of these purely by accident. I absolutely love that "I didn't know I could do that" moment. What IDKICDT moments have you had with your BlackBerry, be it tablet or smartphone? Sound off in the comments.