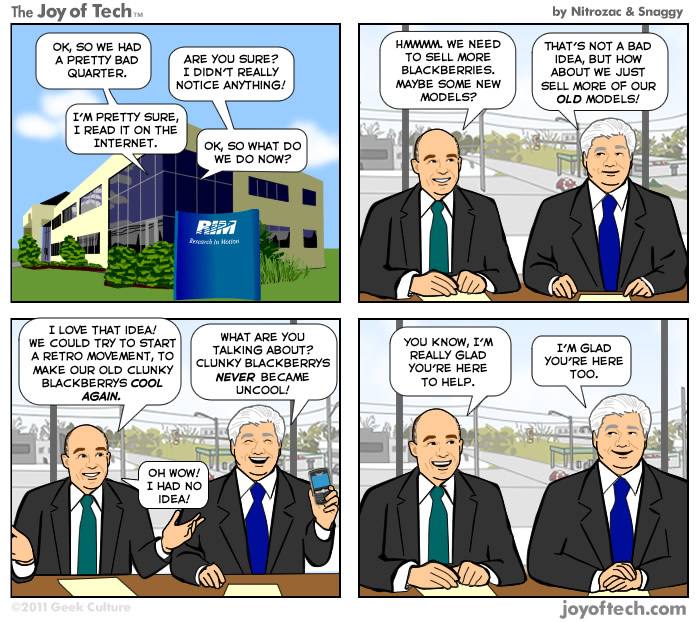 Following up their BlackBerry PlayBook cartoon, the Joy of Tech is back this time taking a little shot at RIM's Co-CEOs Mike Lazaridis and Jim Balsillie following last week's earnings call. It's good for a chuckle, but seriously, I agree with cartoon Mike L... Clunky BlackBerrys never became uncool! I still love my BlackBerry 8700. if they'd update that bad boy with a higher resolution screen I'd so rock the trackwheel again. Talk about a rock solid messaging device. :)

Reflecting on the past five years of CrackBerry, I can't help but almost laugh at the difference between where things were at then, where things are at now, and the change of sentiment we're seeing out there in North American media (for the most part internationally people still seem pretty stoked about BB). Back in June 2006, the month I bought the CrackBerry.com domain name, RIM announced during their quarterly earnings that they moved 1.3 mllion devices. That was awesome news to me then and I, and everybody else seemlingly, was stoked! Now in June 2011, they announce they moved over 13 million devices in a quarter and it's treated it like it's the end of the world for RIM. Sure, I'm a glass half full kind of guy, but I still think those are pretty awesome numbers in comparison to where we were when CrackBerry Nation was more like CrackBery Villlage. And CrackBerry Nation is always rooting for ya RIM, even when we do our occasional vent (like our last podcast).