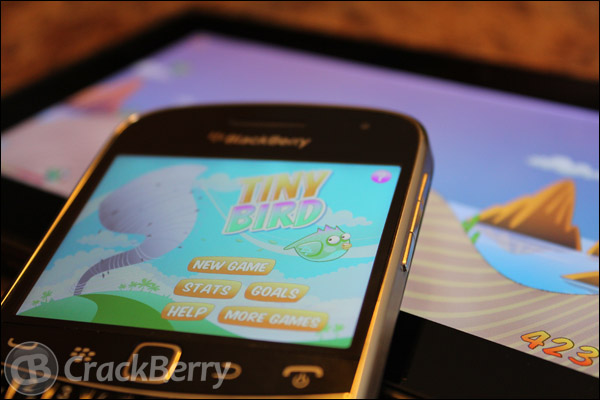 Tiny Bird for the BlackBerry is an action packed, and might I say addicting game where your sole mission is to reach the end of the islands. The game features a small winged bird that doesn't have much of a capacity for flying, so your job is to help it land and use the hills on each island to propel it into the clouds. Continue reading to see how this game stacks up to similar games available on other platforms.

Controlling your way through the various islands is pretty straightforward, just tap and let go. The game features a very simple game control system which allows you to control the birds flight by holding down your finger on the screen to help the bird fall, and taking your finger off to let the bird utilize the hills and fly away.

Tiny Bird has very simple and cartoonish graphics, but they're perfect. The game features islands that are designed to be attractive and colorful. In the background, you will see clouds and other islands that are off in the distance. But, be carful as the visuals can sometimes be deceiving and cause you to crash and get swooped up by the tornado.

The idea behind Tiny Bird is quite clear; get away from the raging tornado. See, isn't that simple? Well, let's back this up a little and dive into the game a bit more before Tiny Bird gets the 'Simple Game' title. The game consists of islands that contain a heck of a lot of hills, and it's your job to utilize those hills and help propel your bird from a tornado that's right behind you. Now, along your journey from island to island you'll see stars and gems along the way. The stars will help you keep the tornado and bay, and the gems will give you that extra boost of speed you need to get through the tougher times. So, simple game play? Yeah for sure, but easy to beat, that I don't think so. But you are the judge.

While Tiny Bird isn't a direct competitor to its iOS counter part Tiny Wings, it's definatly worth the download on the BlackBerry PlayBook. The game features an addictive gameplay, creative graphics, and unlockable achievements. There were a few things missing that kind of baffled me, and one was an online leader board. Online leaderboards are an easy addition that increases game replay value, and Scoreloop is simple and available to BlackBerry devs.