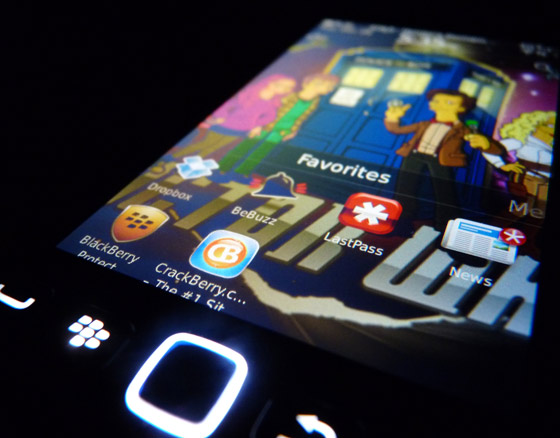 There are but a few days left in 2011; what better time to share with you my most-used apps of 2011 than now. I love my BlackBerry Smartphone for the communication tool that it is. I have one or two games installed on my device, but that's not what I spend the majority of my BlackBerry time doing. The messages app and browser give me quick access to the world at-large, but there are several other apps that truely keep me connected and organized. Head on past the break for the full list.

You'll see this application pop up in a number of my articles; I've even mentioned it in a few of the CrackBerry Podcasts. BeBuzz transforms your boring red LED into a disco ball of excitement! The red LED indicator light is a wonderful thing, letting you know something new is on your phone. Using BeBuzz to customize your alerts, you'll know instantly what type of new thing - be it a new email, Twitter mention, or virtually anything other new notification - simply by looking at the LED flash. The latest version of the software adds BBM alerts, on-screen popup notifications, and a text-to-speech service.

Just about any moment when I have a little downtime, you'll find me reviewing news stories from my RSS. Whether I'm catching up on the latest SOPA/PIPA debacle; learning about some strange new gizmo; or just checking to see if any of my articles were published on CrackBerry.com (I love reading comments), BlackBerry News has me covered. I really like how easy it is to swipe between stories and feeds. Adding a new feed is as easy as typing in a site's web address. BlackBerry News will scan the page for compatible feeds. As a bonus, BlackBerry News uses your BlackBerry ID to keep a backup of your feeds and syncs those same feeds to its sister app, BlackBerry News for the PlayBook. BlackBerry News is not available in all countries. Check BlackBerry App World for a full list of supported countries and devices.

If there's one lesson I'd like to impart upon everyone before this year is out, it's this: don't use the same password for all your logins. If just one of the many online sites you use is lax in their security, a hacker could quite easily gain access to the entirety of your online life (and possibly your off-line life as well). Since remembering individual passwords for dozens of sites isn't practical, I use LastPass. LastPass helps you to use unique, long-string passwords for all your sites - and it's free! Buying the premium membership for the exorbitant fee of $12/year gives you the LastPass for BlackBerry app. It's especially useful for signing into apps on the Smartphone. A simple copy & paste saves me the time it would take to exactly type a 16+ character password consisting of letters, numbers, and symbols. Sadly, there is no LastPass app for the BlackBerry PlayBook.

If you're not familiar with that little blue box, Dropbox is a cloud storage service that lets you sync files between your computers. At CrackBerry, we use it to securely share documents, files, and videos between writers. Personally, I use it so that I can save a file on one computer and have it immediately available to me on another. It's perfect for when I'm Photoshopping an image on the laptop and uploading an article on the desktop computer. While the Dropbox app on the BlackBerry isn't perfect, it does have several nice features and a clean, organized user interface. My favorite feature: from the app, I can email a link to any file in my Dropbox account. Usually a file has to be in a Public folder to be shared; not so with the Blackberry app.