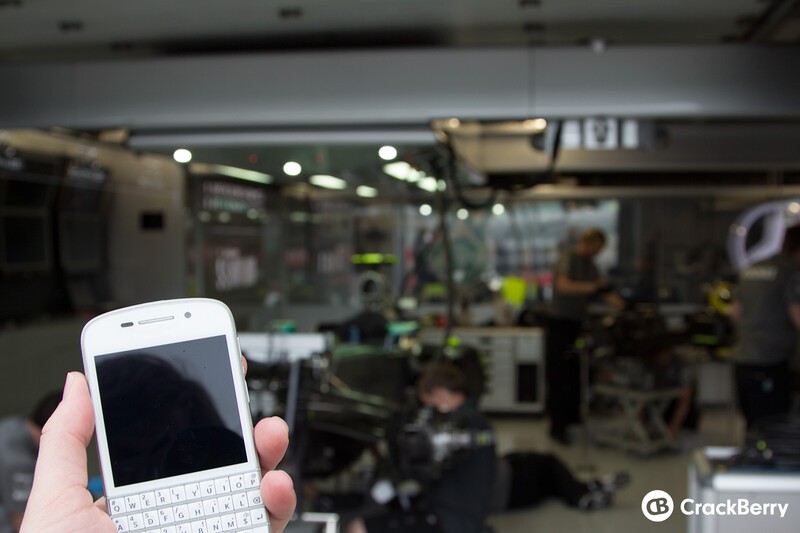 BlackBerry's former Chief Marketing Officer, Frank Boulben, inked a sponsorship deal last year with the Mercedes Formula 1 team. The deal is for three years, and while Mercedes did OK in 2013, the 2014 season is off to an AMAZING start. A lot of rules changed for 2014, and Mercedes clearly nailed the design of their new car. Five races into it, Mercedes has won EVERY SINGLE RACE. They're kicking so much ass I almost feel bad for the other teams.

For an F1 sponsor such as BlackBerry, it's really shaping up to be the DREAM SEASON. The BlackBerry logo is appearing on the podium race after race, and the cars are getting more than their fair share of screen time. As far as traditional premium brand sponsorship campaigns go, you can't really beat Mercedes' performance this year. Unfortunately, this year it doesn't appear that BlackBerry is doing much above and beyond their base sponsorship to further engage the F1 crowd. Last year the BlackBerry.com website featured a racing section (now a dead link), and at some of the venues BlackBerry ramped up on their consumer engagement activities... I attended last year's Canadian Grand Prix in Montreal, and BlackBerry 10 van was out in full force alongside an awesome F1 street installation that drew in crowds of people.

Join the CrackBerry Team in Montreal!

The Canadian Grand Prix is coming up again the weekend of June 6th, 7th and 8th. And since it doesn't sound like BlackBerry will be hosting any street events the way they did last year, we're going to make sure CrackBerry is there in full force to spread the BlackBerry love around Montreal.

Adam Zeis, James Falconer and myself booked our race tickets yesterday, and in true CrackBerry fashion we're getting some custom shirts made up for the weekend as well as a HUGE banner that we'll hold up during the race. If you haven't booked yet and are planning on attending, for Sunday's race we'll be sitting in the "Populaire" grand stand.

CRACKBERRY MEETUP: If enough of us are in town, we'll also try and orchestrate a CrackBerry MeetUp on the Friday or Saturday night. It'll be informal, but it'll be an awesome good time as CrackBerry Meetups always are. We'll get some extra t-shirts made up too, so if you make it to the meet-up we'll hook you up. If you're going to be in Montreal for F1 and want to attend, shoot an email to [email protected] and let us know - we'll follow up with you directly with more details as the Grand Prix weekend approaches.

If you're an F1 and BlackBerry fan and will be in Montreal that weekend, I hope to see you!! And if you have any ideas for clever t-shirt slogans or ideas of what to put on the race banner, let us know in the comments!