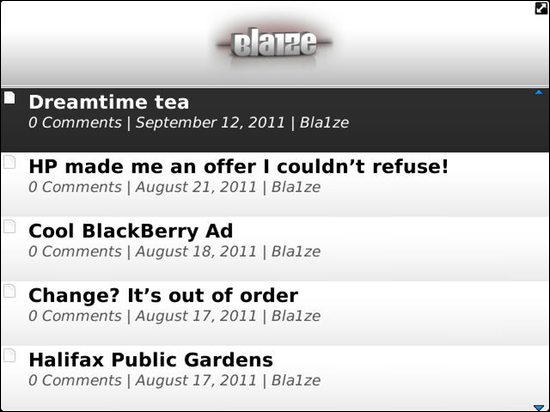 Running your own blog can be fun, maintaining your own blog -- not so much. These days, if you're running an active blog chances are a lot of your readers a using a mobile device which means dealing with mobile versions of a website. That can often times sound easier then reality.

But what if you could create your own app and give it to people which allowed them to read, and leave comments on your blog -- one that was personalized and custom created by you? Sounds awesome right? A personalized touch and something special you can offer your users. That's exactly what JoeMobi is offering you. With JoeMobi you can create your own customized BlackBerry app centered around your WordPress blog and build it the way you want, complete with your own custom icons and banners inside the app.

I've been using JoeMobi since their beta testing started and now, they've announced a wider availability for users. Currently available for BlackBerry and WordPress, JoeMobi will eventually be moving into the Android space as well and with that will come support for other CMS' such as Drupal. If you run a Wordpress blog, and are looking to offer your BlackBerry readers something special, give JoeMobi a look. You'll find their full press release after the break or you can head over to JoeMobi right now for more details.

JoeMobi gives bloggers a customized BlackBerry app that their readers can download to their device and use to read and interact with their blog.

Leave the rest up to the JoeMobi technology as it compiles a BlackBerry app on-the-fly!

“Having their very own, branded BlackBerry app was completely unattainable for the vast majority of bloggers before JoeMobi,” says Harry Scanlan, Director of Mobile Technology and partner at SpeakFeel, the mobile marketing agency and product development firm that built the app. “Now WordPress users can have their very own native app with control over the app’s look and feel.”

Web site owners can copy and paste the code to their site, making it simple for their readers to download the app to their BlackBerry device. JoeMobi also allows users to post responses and comments to blog posts directly from the app.

“Of the 284 million people who view WordPress blogs every month, there will be communities that are more likely to be BlackBerry users, such as sites that deal with finance, fantasy sports or corporate content” says Kelly Brooks, President of SpeakFeel. “This allows bloggers to get prime real estate on their readers’ smartphones.”
JoeMobi is in beta and available for free now to build BlackBerry apps. Soon, Android users and sites built on the open-source Drupal CMS will be able to use JoeMobi too.

“This is just the beginning for JoeMobi,” says Noel Webb, Vice President and Chairman of SpeakFeel. “There are more widgets planned, including ones that will support advertising so that bloggers can increase their revenue stream.”