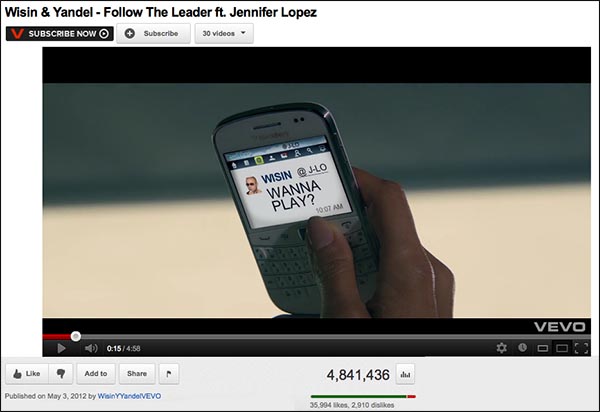 Several times in the past we've seen BlackBerry smartphones make appearances in Jennifer Lopez's music videos, as well as in paparazzi shots and her new show Q'Viva!, leading us to believe that she's a long time fan of the platform. The latest video by Wisin & Yandel called Follow the Leader features Jennifer Lopez, and the opening scenes of the video show all 3 singers using Twitter for BlackBerry on various devices. First a white BlackBerry Bold 9900, then a blue Curve 9220, and finally a Verizon branded Bold 9930 all make an appearance. Of course, the version of Twitter for BlackBerry they are using isn't very realistic as it was obviously enhanced for the video, but it's awesome to see nonetheless.

Interesting to note, the video was shot in Acapulco, Mexico where the government was all too happy to provide whatever extra security and the like that was needed by the singers. The State Secretary of Tourism, Graciela Báez Ricardez, said the video clip will help reposition the image of the port. "The music video will be seen in many countries and millions of times mainly by young people who will make decisions on where to go to take a vacation soon," she said.

It seems that every time we post a music video or other form of Celebrity Sighting, there are always comments wondering why we should care about such "trivial" things. If you take a look at the screenshot above, you'll notice that in less than a week from the video being posted on Youtube it's gotten almost 5 million views. That's a lot of views, and since all 3 performers are using a BlackBerry in such a prominent way during the video, it's sure to have some influence on their audience, not unlike the influence that Ricardez mentioned above regarding tourism.

Take a look at the video below, and leave a comment letting us know what you thought! Thanks for sending this in BoldWorld!