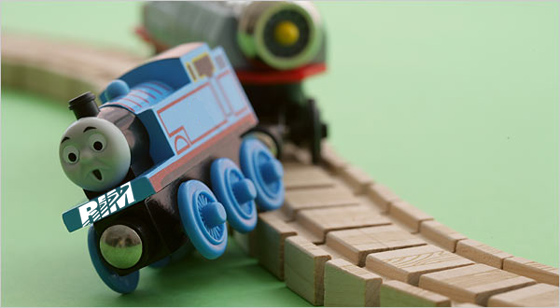 This morning, Jeffries cut its target price on RIM to $12, down from $15. Every news source out there seems to be just quoting a few sentences from it. And who could blame them? There isn't much in the report to go on. I've read it and I'll tell you what it says, along with my take.

First of all, you have to realize that certain analysts on the Street have a habit of trying to make big, bold calls on stocks every quarter. They don't necessarily have any useful information when they publish big calls. They do it for the headlines it generates, and the fact that clients feel obligated to find out if there is anything beyond what was published.

I'm not going to tell you that this guy falls into that category. I'm just telling you it happens, so you need to keep your eye on the content of the report, not just the call.

That doesn't mean this particular report is right or wrong. I'm just saying ... don't put you faith in every big call you read on a stock. Especially if the report is a one pager citing "preliminary survey work".

So what does Jeffries have to say about RIM?

They believe the company has a +50% chance of pre-announcing worse than expected financial results for Q4. For those of you not so well versed with Wall Street lingo, RIM provides guidance for upcoming quarters on each conference call. RIM said it expected to ship 11 to 12 million handsets in Q4. Jeffries thinks that won't happen. They think 10.5 million is the correct number.

I think it's worth pointing out that RIM has a very good history at predicting its next-quarter shipment number. I'm talking about their ability to forecast out by one quarter here, not the long term growth of the company. Let's keep that in check. Point is, RIM has very VERY rarely had to issue a financial warning on next quarters's guidance.

Time to give you a sense of just how "out there" Jeffries is with their call on RIM. When I say "out there", I don't mean to imply they're crazy, wrong, or anything like that. Their call is just very different from consensus.

Keep in mind RIM expects to make $0.80 to $0.95 in Q4 (which ends on March 3rd). If they can actually achieve even the low end of this range and hang onto that level of profitability, consensus estimates of $3.07 make sense. So this report essentially says that RIM's earnings will keep dropping. Like a stone.

Why is their view so strong? In the near term, the analyst quotes "preliminary survey work". But very few details are provided. They think handset sales have deteriorated in North America, Europe and Latin America with a focus on European weakness late in the quarter. I have to say, getting this kind of granularity with any degree of accuracy is incredibly difficult. So call me a skeptic.

Also, I'm reminded of a conversation I had many years ago with a highly trusted industry consultant. He pointed out to me that December and January are great months for mobile phone sales. February is worse. So shouldn't we expect sales to tail off in the last month of the quarter?

Beyond the next quarter, the report talks about the risks of RIM launching BB10 after Apple launches iPhone 5. I think a few points are worth making here.

Yes, obviously we are all disappointed that BB10 is delayed until later this year. It sucks. And it isn't news anymore.

Carriers don't exactly push the iPhone. Apple pushes it (successfully of course). Carriers don't want to turn into a dumb pipe, so they're open to partnering with handset vendors who can stall or prevent this from happening. RIM is seen as one of those vendors. If BB10 delivers the consumer experience, carriers will push it.

We shouldn't draw long term conclusions on the success or failure of any platform based on the order of who launches what within a short term time window. If RIM was releasing BB10 one month before the iPhone 5 would it really matter? No, it wouldn't. It might prevent a few BB users from jumping ship as their old contract expires, but the overall numbers are not consequential to the long term results.

Overall, this report from Jeffries doesn't spell out any details on any "survey" details, nor does it convince me that there is any substance to the call. That doesn't make the call right or wrong. It's just not convincing. Just sayin'.