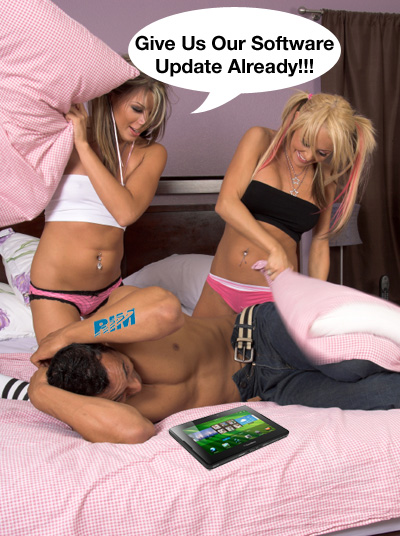 OK CrackBerry Nation. This is it. Or well, it had better be it... or else I'm not sure what's gonna happen (but I guarantee it wouldn't be pretty). Previous leaked word has it that the long-awaited BlackBerry PlayBook OS 2.0 software update is going to drop at 4:01am on February 21st. We've also heard 5am, which we think it will be. And while the timezone hasn't been officially divulged, most indicators are pointing to that being EST. So either way, for those in North America that means staying up late or waking up real early.

A good chunk of the Crack Team is going to have a slumber party and stay up for it. You know we'll be wanting to blog the release the second it hits. We've been waiting for this launch for a lonnng time now so will be following up this week with all sorts of BlackBerry PlayBook OS 2 goodness. You'll want to keep it locked to CrackBerry.

In the meantime, drop a note in the comments or on our PlayBook OS 2.0 Slumber Party thread in the forums if you're going to be glued to your PlayBook tapping the Software update button. Oh yeah, and if you've never updated your PlayBook's software before you can learn how here.