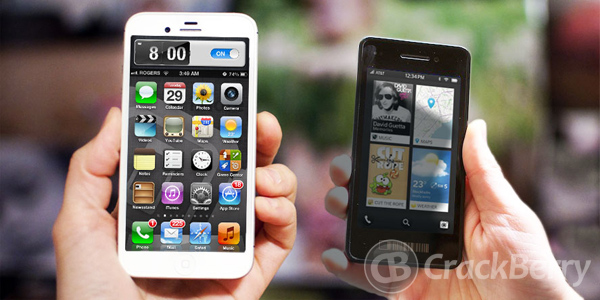 Would an early availability of the iPhone 5 overshadow BlackBerry 10's success? We don't think so...

Does it matter if the iPhone 5 beats BlackBerry 10 to market? This was one of the topics that came up in the chat room discussion during last week's CrackBerry Podcast. One listener in particular was asserting it would completely botch the launch of BlackBerry 10 if the iPhone 5 were to be available sooner.

With our sibling site iMore breaking the rumor that the iPhone 5 will launch in October, and the first BlackBerry 10 phone expected "later this year" (which most of us think means October as well), it seems entirely possible that we could see these next generation devices launch within weeks or heck, even days of each other.

This podcast listener isn't alone. I have seen quite a few comments and posts from CrackBerry readers suggesting that if the iPhone 5 were to go to market first it would not bode well for BlackBerry 10. As in lights out. Too late. Game over. But as we discussed on the podcast, we don't think it's the iPhone 5 factor that will determine whether the launch of BlackBerry 10 is a success or not.

More critical than when BlackBerry 10 launches, be it before or after the iPhone 5, is that it delivers a great user experience to the people RIM is building it for. As RIM said at BlackBerry World last month, they are building BlackBerry 10 for BlackBerry People. It's not a phone for sheep. It's a phone for people who do.

BlackBerry 10 needs to translate the get sh!t done communication and user experience that people loved about the original BlackBerry OS and not screw it up while bringing it up to the powerful and much more modern QNX-based BlackBerry 10 platform. It needs to be solid. No bugs. The more complete it is, the better. I'm sure there will be some functions missing at launch that are available on other platforms (like a voice control Siri type app...), but that doesn't really matter. What matters is the *important* stuff is there. Make the keyboard rock. Make it rock at communications. Make sure the app store has all the important stuff in that people care about. Make the web browser rock.

Look, nobody (with a properly functioning brain) is thinking when the first BlackBerry 10 phone launches that it's going to outsell the iPhone. And it doesn't have to for the launch of BlackBerry 10 to be a success. As I said following BlackBerry World, BlackBerry 10 will not appeal to everybody. And that's a good thing in my opinion, because I don't want an iOS clone experience on a BlackBerry. I want a better BlackBerry experience.

It's going to be critically important that BlackBerry properly market and get the message out to the world of exactly who BlackBerry 10 is for and what the value proposition is for those people. Part of that clear messaging is also making people intuitively understand who BlackBerry 10 is not for... people who don't.  Though as Chris Umi pointed out on the podcast, most people are going to consider themselves as people who do even if they are not.

Obviously Research In Motion **NEEDS** to get BlackBerry 10 onto the market as soon as possible, and if they can do that before the iPhone 5 hits all the better. Every day BlackBerry 10 is not available, RIM is losing potential customers and bleeding dollars and market share. They still have money in the bank, and money equals time to execute, but with RIM set to post an operating loss for the quarter, it's an indicator that we'll likely see RIM start to eat into their cash reserves moving forward vs. grow them, at least until BlackBerry 10 sales start flowing.

I'm still a firm believer that RIM will get BlackBerry 10 to market, and I also believe the release of the iPhone 5 is less important to BlackBerry 10's success as is RIM simply making sure BlackBerry 10 rocks for the people who are waiting for it. Throughout our network of sites and elsewhere on the web, I'm seeing more and more comments from past BlackBerry owners who are now iOS / Android / Windows Phone owners that they're thinking about trying BlackBerry 10 when it hits. This is a good sign, and it's independent of the release date of the iPhone 5.