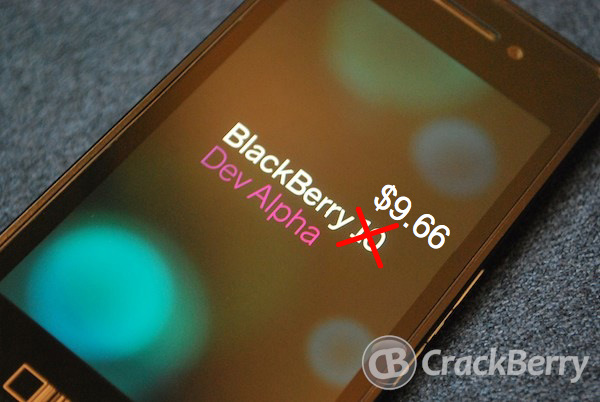 Yesterday RIM's stock price dropped below $10. It's an arbitrary number, but it's psychologically important. This is a stock that has moved from a high of over $140 to $9.66 to close out Monday's trading session.

Why did the stock get hit so hard yesterday? James Faucette of Pacific Crest put out a bearish note about weak sales in May. But it's hard to believe that's much of a surprise to anyone considering the company already warned of losses for the quarter.

I think the decline is just a continuation of the weakness we've been talking about for a while. Stocks move up when there is good news, and down when there is bad news. RIM hasn't really had anything good to talk about lately, so it keeps dropping. It isn't going to stop until something happens.

That something could be reaching a low enough price that deep value guys start diving into the stock. But diving into RIM here takes big guts. I wouldn't count on value being a floor in the near term. It has to be something else.

Yesterday we talked about strategic alternatives for RIM in case Plan A fails. If the market starts to believe that something will happen, the stock will pop. Or if we get enough signs to show people that BlackBerry 10 is coming on schedule, has great hardware, and support of carriers, it could pop. Oh, and it wouldn't hurt to have some support from Skype or Netflix to give RIM some big-name social proof as a valid future platform.

Without any of those things happening, RIM probably keeps dropping. Remember this article discussing the stock's valuation? I looked at cash, real estate and patents (only the Nortel patents) to guesstimate a floor valuation. Updating the numbers to reflect the most recent financials, this would take you to about $9 per share.

But I also said this value would be meaningless if RIM started losing money, which is exactly what has happened.

Also, let's think about RIM's balance sheet a bit. They had $2.1 billion in cash at the end of Q4. They say cash went up in Q1, despite being unprofitable. In all likelihood, the cash increase was a function of reducing working capital.

For those of you not familiar with what I'm talking about here's a simple explanation. Growing companies will have rising inventory, rising accounts receivables, and accounts payables. The money tied up in running the company is called working capital. As a company shrinks, the working capital also shrinks, so it's a (temporary) source of cash. Shrinking and pulling money from working capital is NOT good news. Ever.

RIM's cash flow statement will also look stronger than the income statement because it takes depreciation charges (non-cash) of over $1.5 billion per year while capital asset purchases were only $900 million last year.

So, roughly speaking, if RIM is at break even on the income statement then they can probably pull in about $600 million per year in cash flow, plus whatever it sucks out of working capital. That will protect the cash position to some extent.

And what if they continue to shrink before launching BlackBerry 10? RIM is a company that spent over $1 billion in operating expenses last quarter (R&D plus Selling, General and Administrative). It's tough to turn off the taps too quickly. Besides, without promotional efforts, you have a death spiral. It's dangerous.

Finally, let's think about the cash available for a BlackBerry 10 launch. This is something I chatted with my good friend Ed Zabitsky from ACI Research on yesterday. If we assume RIM still has $2 billion by the time they launch, and they need, at minimum, $500 million of cash to cushion the day to day operations, they have $1.5 billion to invest in inventory. If we assume the manufacturing cost is $300 (probably conservative, I know), then RIM can manufacture at most 5 million units before it needs to wait through a cash collection cycle.

Now, selling 5 million BB10 devices would be truly fantastic, and I think it would convince people that RIM has returned. But, what if they screw it up? They do not have the balance sheet to support a large scale screw up. That's the point Zabitsky and I talked through yesterday. RIM will have to roll out BB10 in a way that its balance sheet can support.

I know I could talk about this for another thousand words easily. But I'll wrap up here. Sound off in the comments. Let me know your biggest questions, thoughts, concerns, etc.

... and I'm just dying to see if someone still accuses me of cheerleading, which would undeniably prove some people just can't read. Man, I want RIM to succeed. But we have to keep our eyes open and look at all angles.