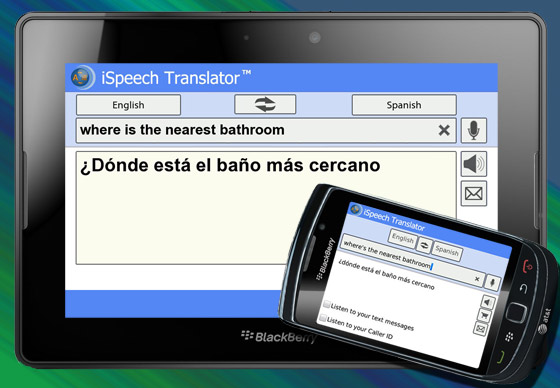 From the people who brought you DriveSafe.ly, the application that speaks your text messages, comes iSpeech Translator. Yes, friends, the iSpeech Translator is available for the PlayBook and any BlackBerry smartphone that runs OS 1.0 and higher, in any country, on any carrier. Unless your BlackBerry is half a decade old, you too can run iSpeech Translator. Even better, iSpeech offers a free, fully-functional version of the app.

Okay, enough of the infomercial. iSpeech Translator is an easy to use application that's designed to make it easy get good translations on the go. In my own experience, the app is rather accurate in its translations, free from the simple errors you often see in machine-translated language. Even native speakers (who speak English as a second language) agree; iSpeech Translator is remarkably accurate.

The really amazing ability of this app is its voice-to-voice translations. After granting permission to use the microphone(s), you can simply speak the words you would like to be translated. iSpeech Translator can understand 7 languages, including English, Spanish, Portuguese, French, and Italian. Want that translation read aloud? The translating app can "speak" 18 of them. For the more than 30 other languages, you can get simple text-to-text translations.

The app does this by transmitting a recording of your voice or the text that you've entered back to the iSpeech Recognition Cloud. There, your voice and text are sampled, parsed, sliced, and diced until the system understands what it is you need translating. From there, a translation is created. If it's in one the 18 languages iSpeech can speak, a small audio file is sent back to your BlackBerry (be it smartphone or tablet) to be played aloud.

The app is an excellent translation tool, but that doesn't mean you can't have fun with it, too. To be fair, this "fun" comes from the slightly juvenile side of my personality, and it won't appeal to everyone. Keep in mind, too, that we like to keep the CrackBerry blog Safe for Work, so you might need to use your imagination on this one.

It's really kind of fun to translate....let's say "interesting" things into a foreign language. As I said, the app is remarkably accurate and understands slang and colloquialisms pretty well. In some ways, it's quite amusing to hear NSFW words spoken in a different language. Then, change the settings to give you English to English translation (or Spanish-to-Spanish or French-to-French, etc.) and let your friends hear just what it was that you translated.

On paper screen, this sounds like an absolutely foolish thing to do. Perhaps that's why it's so funny to hear a machine use words you'd never expect to hear from a machine. In eighteen different languages.