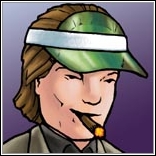 Magmic Games is a leading developer and publisher of mobile entertainment, offering a wide variety of games for BlackBerry handsets. John Criswick, founder and CEO of Magmic Games was kind enough to take a few minutes and talk with us.

John: It is a G like in magma, in fact the word magmic has the same roots as magma as in a "slow moving hard to stop fluid".

Last summer you launched a new division called "Bplay" to focus exclusively on the BlackBerry community even though the name "Magmic" is practically synonomous with BlackBerry games. Why did you feel the need to create a new BlackBerry-only identity?

John: BPlay is a brand we created to leverage our extensive experience with BlackBerry to bring more than Magmic's BlackBerry games to market. BPlay has introduced AAA branded titles to the BlackBerry as well as ring tones and themes. Basically it has become a source for premium "carrier grade" content for BlackBerry. For me the key is "carrier grade" as in quality of product and support.

Of all the plaforms that you currently support, is BlackBerry the main focus of your company?

John: We have in-house tehnology that allows us to support a wide array of platforms including Java, Brew and Windows Mobile. Within Java we support some specialized platforms like the BlackBerry and Sidekick. Indeed BlackBerry is part of our core business strategy as it provides us a stable and significant source of revenue.

BlackBerry devices are known for attracting business professionals. How much does this factor into the type of game that you develop?

John: In general the demographic of the mobile game space is the same demographic as the console gaming space (18 - 30 year old male). We find the BlackBerry game market is an older demographic both male and female so with higher sophistication and less interest in complex games.

What is your most successful BlackBerry game?

John: Texas Holdem King 2 happens to be our most popular BlackBerry game. Sudoku is still a close second after which it is BattleStations, BrainUp and Ka-Glom.

How about a scoop on your next project. What's next for Magmic?

John: There are a few things coming up: