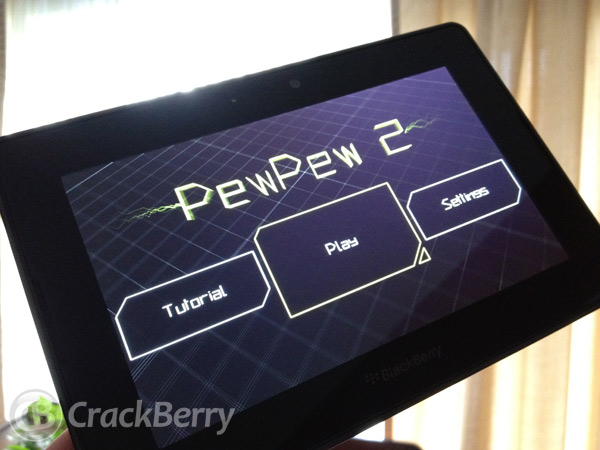 The BlackBerry PlayBook app ecosystem is exploding so quickly it's hard for us to keep track of all the new apps and games that developers are building. The latest one to come across my desk is the second installment of a popular PlayBook game called Pew Pew. Pew Pew 2 expands upon the original and offers up more intense game play and an extra dash of retroness. Continue reading to see what the newest addition to the Pew Pew series has in store.

The premise behind Pew Pew 2 is to shoot down all the enemies. While it sounds simple, with the retro style levels and the captivating soundtrack, you can get distracted easily. The game features two play modes - campaign and infinity. In infinity mode the battle never stops with wave after wave of space invaders and just you there to battle them off. If the pure adrenalin isn't your thing you can try the campaign mode. Campaign mode gives you a slightly slower start and lets you get seated in the game, but be ready for the intense battle that's ahead of you.

Within your settings page you have a small stash of variable options like the option to customize the locations of the virtual joysticks, replay camera view, screen orientation view, and various settings for music and sound effects.

The controls throughout the game are simple and easy to master. On the left of the screen you are presented with your directional virtual joystick and on the right you have your trigger. The one tricky thing about your trigger is that you also have control over the direction of fire, so you have a 360 degree range around your ship in which you can aim and fire at your enemies. To pause your game or to get access to a few quick settings you can use the native swipe from top bezel on your PlayBook.

When I first looked at this game my immediate thought was Tron. Some may remember Tron the movie or the cartoon from years back, either way if you remember you should have a good idea how Pew Pew 2 looks on the PlayBook. While the game is a top stroller (birds eye view) it still employs 3D environments to give you a sense of depth and even give you a little vertigo at times. I would have to say that the graphics style has been put to good use and works well with the game style and the game play.

With retro graphics one would expect some retro styled background music to go along with it, and that there is. Whether you battle it out through a level on campaign, or you're doing the free game play you will be accompanied by an interesting yet fitting soundtrack. Unlike some games I found the soundtrack actually added to the gameplay offering not just background music, but also helping to create those moments of panic as 30 or 40 ships are coming after me. One thing I do wish the developer added was the ability to play my own music, but maybe that could come down the road.

Just like the original Pew Pew game the successor to it doesn't let you down. With the same beautiful Tron like retro graphics and music Pew Pew 2 will find you hours upon hours of game play. The ability to unlock levels and various ships gives the game some extra replay value, really stretching the $2.99 App World price tag.

I was really hoping that the developers of this game added a multi player option into it but sadly that isn't something that was included in Pew Pew 2. Without the addition of something like multiplayer this game doesn't have much of a reply value other than the ability to unlock other spacecraft's.

With this being a successor from the original one would expect there to be enough differences in the gameplay as well as graphics to warrant that, and Pew Pew 2 steps it up in both categories. With the addition of a better soundtrack, full campaign mode and new graphics in Pew Pew 2, I would definitely recommend giving it a try. But there is one thing I do want to conclude with, if you are thinking that the $2.99 price tag is a little high for a game you're unsure of, why not give the first version a try, its free!

If you like the look and sound to the latest Tron movie and enjoy traveling through space shooting down the enemies you're going to love Pew Pew 2 for the BlackBerry PlayBook. While the lack of a multiplayer has me down a little the over all game is to good to pass up, you will definitely want to pick up the latest installment to the Pew Pew franchise Purchase Pew Pew 2 for the BlackBerry PlayBook