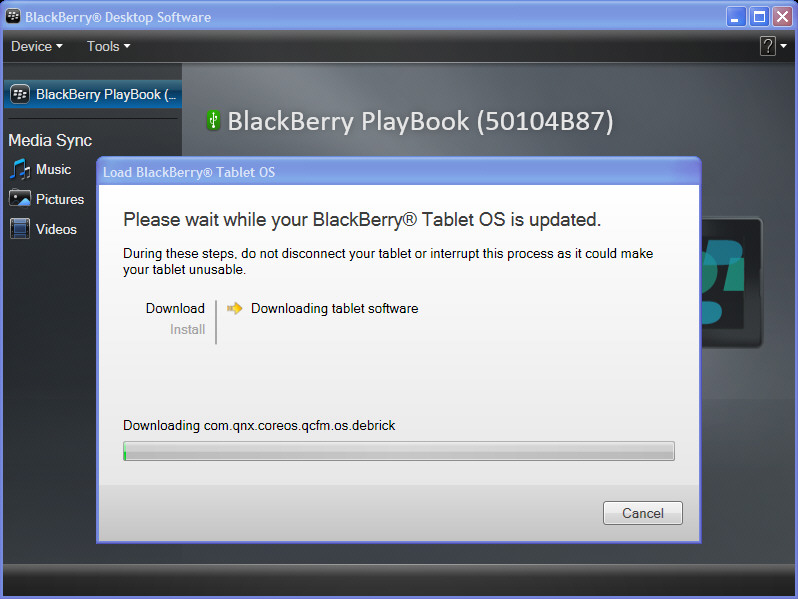 So this is pretty awesome for all you hardcore CrackBerry readers + PlayBook owners out there who want your PlayBook to have the absolute latest software on it, even if it's an internal build that will never get pushed out to PlayBook owners via the WiFi update. This means if you Check for Updates on your PlayBook, none will be available (it says your OS is current), but if you follow the steps in this blog post you'll be able to upgrade to a newer version. Props go to Scott at BBSync for figuring this one out.

To upgrade your BlackBerry PlayBook to the latest internal version of the BlackBerry Tablet OS, do the following:

Step 1: Connect your PlayBook to your PC via MicroUSB cable and open Desktop Manager
Step 2: Backup your PlayBook! This install process is a CLEAN WIPE. You'll lose all data.
Step 3: Within Desktop Manager, hit Device > Update on the menu.
Step 4: No Update will be found. Just hit ok and go back to Desktop Manager homescreen.
Step 5. From there, while still plugged in, Restart your PlayBook using the power button app.
Step 6. A new popup window will appear giving you some options. Hit Update.
Step 7: Let that baby update and you'll be on the latest software. Warning: it takes a while!

It's kind of funny to see that this is RIM's way of fixing a bricked PlayBook (see the debrick in the filename above?!). It's also pretty awesome that this process loads up what we think are the latest internal builds of the PlayBook. The day the PlayBook was released, it launched with version .1690 software. Later that day we saw some PlayBooks get updated to .1696 via this method. If you follow this process above right now, you'll get updated to .1705. Yet via the WiFi update method .1690 is still current. As always with this sort of thing, do so at your own risk, but a few of us have tried it now with great success. It's hard to say how long RIM will allow this to continue to happen for, so get in while the getting is good!