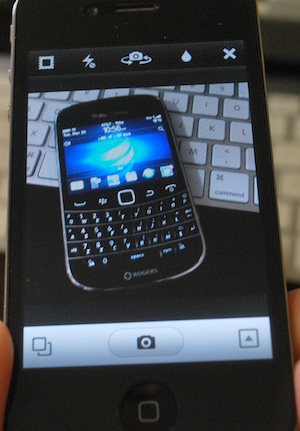 What makes Instagram so great?  It's addicting, social, creative and just plain fun. Instagram for BlackBerry is something we'd like to see in the near future -- be it for BlackBerry devices now or a BlackBerry 10 Instagram for phones and tablets later on. While we have a few alternatives for BlackBerry like LensBoost, Photo Studio and InstaPhoto none have the draw or following of Instagram. Obviously it's hard to get a new app to catch on in the same fashion, especially when it's not cross-platform. In the BlackBerry World these apps are fairly well know, but ask anyone on iOS or Android and they likely won't have a clue what you're talking about. Instagram is the way to go.

Rumors of Instagram heading to Android means good things for PlayBook owners as we might be able to sideload the app after it's release, but that is yet to be see. It will take some work as well since Android apps on the PlayBook cannot access the camera, so users would have to load images directly to the app (providing it works at all). Given the time it's taken to bring Instagram to Android, it may be longer still until we see it land on BlackBerry. BlackBerry 10 is the perfect platform for Instagram, so we can hope that come the end of 2012 we'll finally see an Instagram for BlackBerry.

Discuss more in the CrackBerry Forums!