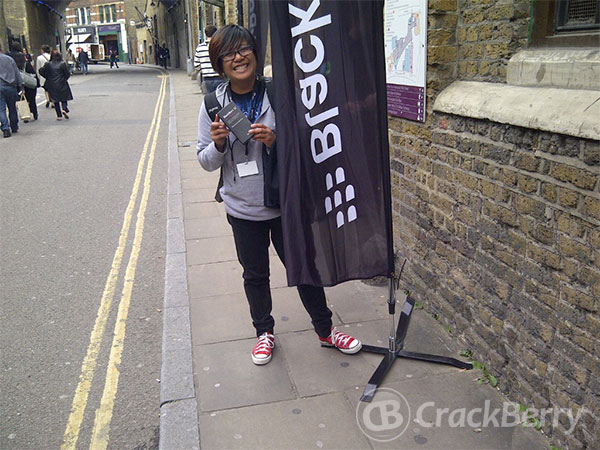 June 14th 2012, London. I had the pleasure of attending the London stop of the BlackBerry 10 Jam World Tour. It did take me an overnight journey of about 9 hours to get there but it was worth it. The BlackBerry 10 Jam event was held in Vinopolis in South London. I arrived at the venue around 8:45am and there was already a queue to get in for badge pick-up, which began at 8:30am. With my badge picked up I was directed upstairs for some tea, or in my case coffee, lots of it. Finally met up with James, who was very lucky to get some hands-on time with BlackBerry 10, before it was time to mingle with other developers. You could definitely feel there was a positive feel in the air, even before the keynote started. Developers were chatting away with each other, talking about their apps, catching up with folks they haven't seen for a while, it was nice soaking up the love for BlackBerry.

Soon enough we were being ushered into the main hall where the keynote would take place and there was still a queue of people outside waiting to get their badges. Slowly, the keynote started filling up. Shortly after the scheduled time of 9:30am, BlackBerry 10 Jam kicked off. A video tape played on the big screen, it was Alec Saunders, Vice President of Developer Relations turned rockstar for the day, performing a parody ofTom Petty's classic The Waiting. The lyrics said it all. "The waiting is the hardest part". Waiting for BlackBerry 10 to drop is certainly going to be the hardest part, especially with all the sneak previews we've been getting. There was huge applause once the video finished, a lot of love there for Alec Saunders from the 500 strong developers in attendance. Yes that's right, there was 500+ plus in attendance at the sold out London event, it was certainly jam packed in the room.

Keynote starting to fill up

It was time for the keynote. If you've watched the keynote from BlackBerry World in Orlando, this keynote didn't veer off much from that. A few stats here and there stated, mostly U.K numbers, as well as them proudly confirming that BlackBerry was the number one smartphone in the U.K. for two years in a row (2010, 2011). Then came the demo from Vivek Bardwaj. He gave a demo pretty similar to the one he gave at BlackBerry World back in May, in Orlando, showcasing the BlackBerry 10 Experience. The flow (which was spoke of a lot) that included the ability of being able to peek back to your notifications from wherever you are, how seemless it is to switch between running applications, the keyboard and of course the short camera video demo was shown. Judging by the reaction of the crowd when that was played, it definitely went down well.

After the keynote there was a short break and then back into the main hall and it focused on giving a overview of the BlackBerry 10 Architecture. Flow, Connect and Extend were pretty much the key things they wanted us to remember.

It was all things that I certainly am looking forward to becoming reality. There was also demos given on by folks from Marmalade and members of RIM's own development team. They showed us a few of the tools already available to developers to help build and create apps for BlackBerry 10. Of course, the demo-demons had other plans when it came to live demos and it was shame not to see the WebWorks demo of the bbUI.js framework used to give apps that look and feel of a native app.

Lunch was next and it was time to mingle some more with developers. With so many to meet it was hard to find time. However, I did manage to catch up a few a couple of guys from Rareloop (actually during the short break between the Web track sessions). I am actually going to leave a bigger post for these guys as they have come from developing on the Android platform but now feel that the BlackBerry Platform has much more to offer. So, I'll that for another post.

Web track session about to begin

After lunch was the time to get more technical where the day broke out into the sessions which you had to pre-register for. The Native track sessions and the Web track sessions. I had signed up for the Web track sessions as this is the area I am looking to develop in so I can't say anything about how the Native sessions went. Though I won't bore you much on the Web session either as most of it was technical. I also don't want to spoil it for those who are going to be attending the other BlackBerry 10 Jam cities. What I will say of the Web track session, carried out be Rana Puri, is that it was very engaging and informational. It certainly inspired many to get right down to developing almost straight away. I say this with a lot of heart. For one because if you follow the #BB10Jam hashtag, a lot of developers are cracking away. And two, because I took along a 14 year old boy, with no knowledge on HTML/CSS or coding whatever so ever and one who never showed much desire in making apps. He came away after the sessions with so much passion and excitement that he wanted to start creating apps and knew what he wanted to make straight away. He even managed to snag himself a Dev Alpha after pitching his brief idea to some of the guys. That is certainly something that has added to making the whole event very much worthwhile.

With the sessions now over it was time to pick up my Dev Alpha. With 500+ developers (perhaps not that number as you had to be qualified to get one) there was always going to be a long queue. However, they made it easier by offering alcohol to those at the back of the queue and telling them to come back when the queues died down. Soon enough everyone got their Dev Alpha and it was smiles all around.

Queue going in to pick up the BlackBerry 10 Dev Alpha

It certainly is an event I encourage developers to attend. A chance to meet other like-minded developers as well as get the tools and information you need to get you started. Of course, it's hard to cram things into 3 or so hours and there's still going to be lots of other things needed but it's a damn good start. One thing I will say though is that I did think that we would have had the chance to build apps on the day. Maybe it was a time issue or possibly the fact that with a sold out event and that many in attendance, it wasn't really possible. But it would have been good if we could have.

Register for one of the BlackBerry 10 Jam World Tour cities