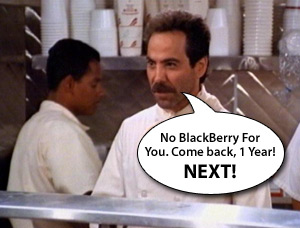 The Indian Government has now threatened a total shutdown of BlackBerry services in India, unless RIM complies to their demands. The government wants encryption keys so that they can monitor all messages sent from BlackBerry devices within the country... They are concerned about the possibility of terrorists using the devices to communicate.

The threat, er, 'ultimatum' was reported in the Indian newspaper The Economic Times. The article quoted anonymous attendees of last weeks' meeting between RIM, Indian officials and the Canadian High Commission. For all intents and purposes it is looking like last weeks' meeting will be the last.


The longer this ordeal has gone on, the more the Indian Government has looked like the 'Soup Nazi' (at least in my mind) from Seinfeld. 'No master encryption key? Get out of my country!'

RIM has to stick to their guns here. I'd be very surprised and extremely dissapointed if they backtrack and succumb to the Indian Governments demands... especially when the demands are for something that RIM insists they can not produce.