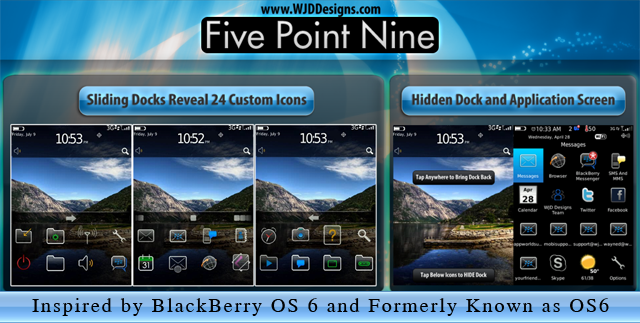 I know after today's sneak peek video of BlackBerry 6 by RIM, many of you are jonesing to get your hands on it! Until that happens, I think the next best thing one can have is a parity theme for your current device that provides a a little taste of BlackBerry 6 right now. Enter the Five Point Nine theme by WJD Designs.

Five Point Nine is essentially the same theme as WJDDesign's previously #1 best selling OS6 theme. It had to undergo a few minor tweaks to keep the lawyers from a certain company happy, including a branding change, but it's now back in the catalog available for sale. Five Point Nine is available for the BlackBerry Storms, Bold 9700/9650, Tour and Curve 8900 (running 5.0). It sells for $2.99.

Click on through to the Five Point Nine product page for full details, more screen captures and video. As for the new name Five Point Nine... well, that was all me. When Wayne relayed his re-branding dilemma to me that was the first name that popped into my head. :)