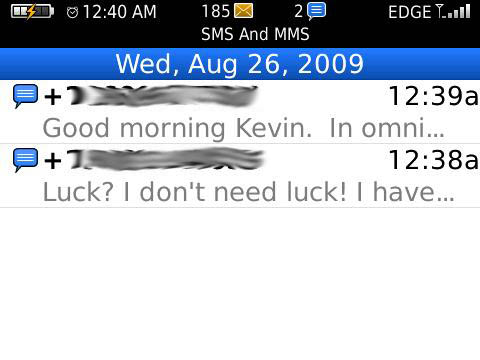 With OS 5.0.0.190 surfacing for the BlackBerry Bold and Curve 8900, we finally have visual proof that RIM will be bringing threaded SMS to BlackBerry. Why it took so long who knows, but when OS 5.0 officially rolls out in the weeks/months ahead (it's all unofficial looks so far) that this long-standing pain will be no more. Below you can see some more screen captures of it in action. This one of those things I really hope RIM can find a way to make backwards compatible to older OS platforms. So far we've only seen OS 5.0 love for devices that originally shipped with OS 4.6 or 4.7, but I have a feeling there a ton of BlackBerry Curve 83xx and Pearl users out there that would kill for this. Sure, BlackBerry Messenger is where it's at.... but if you have friends that for some reason don't own a BlackBerry, then threaded SMS is a must.