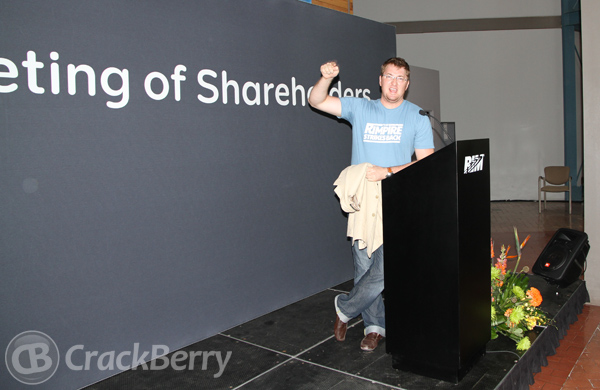 Get ready for it. My flight is booked and on Monday I'll be making the trek to the birthplace of BlackBerry. On Tuesday morning Research In Motion will be holding their Annual General Meeting of Shareholders in Waterloo, Ontario.

I attended the AGM last year. It was my first trip to Waterloo and I went there wearing my Rimpire Strikes Back T-shirt (a huge hit with the hometown crowd), not quite knowing what to expect. This year I'm going back much more mature in my understanding... and with way longer hair than the photo above.

It's amazing just how much and how little has changed in the past year. On the business operations side we have seen massive restructuring from RIM, not the least of which is a new CEO. On the new device front, well... I'm going to be rocking a Bold 9900 next week - the same phone I tried to run away with from Waterloo last year. As for a phone based on QNX... it was at last year's AGM that then Co-CEO Mike Lazaridis told us that QNX phones would come in Q1 of 2012. Last week we learned that's now Q1 of 2013. Suffice to say, between the BB10 delay and with the share price where it's at there's no doubt a lot of tough questions will get thrown at Thorsten Heins and company next week.

Which brings me to my questions for CrackBerry Nation:

Q1. What question do you still want answers to? RIM has gone on a media blitz this week, but if you're not seeing the questions you want to get asked get asked (or the answers you want to hear), let me know in the comments. I'll do my best to come home from Waterloo with answers.

Q2. What t-shirt should I wear this year? I don't think we're striking back until BlackBerry 10 launches, so I need something to wear that's more suitable to the time and circumstance. I was kind of thinking a Journey-inspired "Don't Stop Believing in BlackBerry 10" shirt might do the trick. Have a better idea? Drop it in the comments!

And if you happen to see me in Waterloo, don't be shy. Be sure to stop me and say hi!